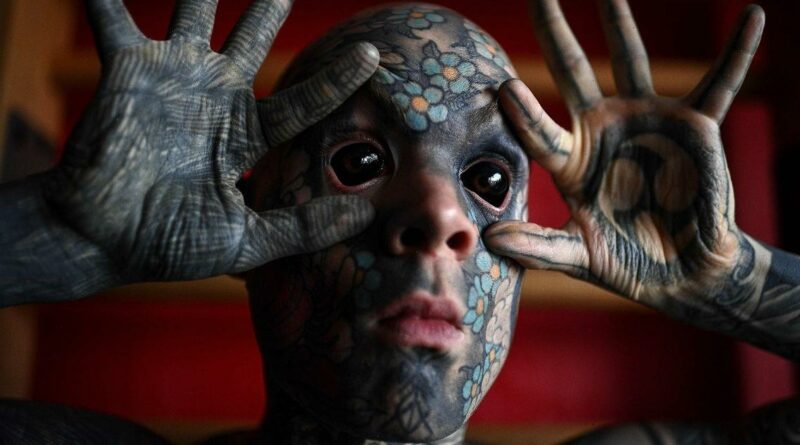 A tattoo obsessive has been called the “world’s most terrifying teacher” thanks to his extreme ink and body modifications.

Sylvain Helaine has worked as a teacher for over 10 years in London and Northern France despite being covered in £52,000 worth of tattoos.

The inked-up bloke is covered head to toe in dark designs – from his scalp to his legs and even eyeballs.

Sylvain has tattooed his entire face, tongue and body and was held down while a tattoo artist injected black ink into the top layer of his eyes.

The teacher, who believes he’s spent 460 hours under the needle, went to Switzerland for the dangerous procedure which made him go blind for days afterwards.

The eye tattoos – known as scleral ink – is extremely risky and has been known to cause people long term health issues.

Speaking on This Morning in 2020, he said: "You've got one guy holding you down and the other coming with a syringe and putting it straight into your eyes.

"It's like torture. I won't recommend it to anyone because it's painful – you can't see a thing for a couple of days after.

"You pretty much feel you will lose your sight – and actually a lot of people have lost their sight. So don't do it."

Despite his warnings, a number of other extreme tattooists have had their eyeballs tattooed – and some even say they didn’t feel a thing.

Sylvain is a primary school teacher, but also has a huge following of over 91,000 on Instagram.

He operates under the name “Freaky Hoody” and shares photos of his extreme body art.

However, despite being proud of his bizarre look, the teacher was told he could no longer work with nursery age kids after a three-year-old suffered a nightmare due to his appearance.

Sylvain was teaching near Paris when the little boy’s parents complained about his look.

The teacher and model noted: "One three-year-old boy apparently had a nightmare after seeing me.

"He complained to his parents and they wrote a letter to my hierarchy saying that I was a radicalised man."

Now, Sylvain is only able to educate children over six, but thinks it does kids good to be educated by someone with his look.

He told BFM TV: "Children who see me learn tolerance of others.

"When they are adults, they may be less likely to be racist or homophobic, and they will not look at disabled people as if they were something from a circus."