Publishing your first novel as a 70-year-old grandmother-of-three is quite a coup. But Anne Youngson’s Meet Me At The Museum, a present-day tale of late love, is already being hailed as a classic.

The novel tells of a 60-plus man and a woman — with more of their life behind them than ahead — who connect unexpectedly by letter.

It sold in a major deal 48 hours after she submitted it to publisher Transworld, which is bringing it out as its lead fiction title for this summer.

Transworld’s recent successes include Paula Hawkins’s The Girl On The Train and Rachel Joyce’s The Unlikely Pilgrimage Of Harold Fry so, inevitably, there is a lot of excitement about Meet Me At The Museum.

Much has been made of Anne’s age. Becoming a publishing success late in life is rare — other late-blooming writers include The Camomile Lawn’s Mary Wesley, who published her first novel at 71, and Laura Ingalls Wilder who was 64 when she wrote Little House In The Big Wood. 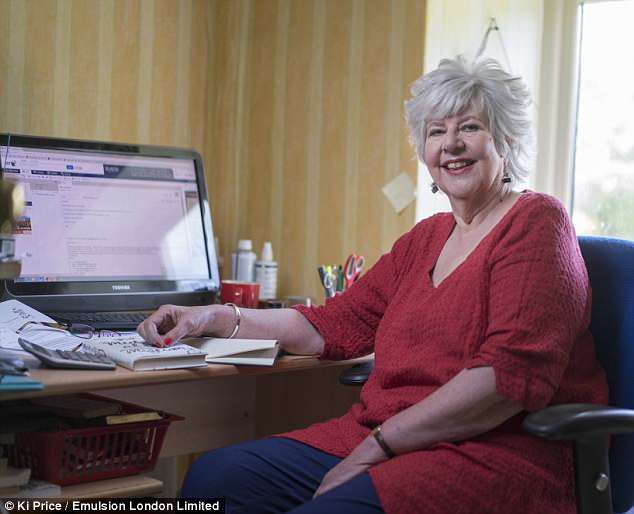 Grandmother-of-three Anne Youngson, 70, (pictured) has been celebrated for her first novel Meet Me At The Museum. She shared her inspiration behind writing the book

But in person, Anne seems ageless. The trick, she says, is mixing ‘with people not like me’. ‘I have friends in their 30s and 40s. And the oldest member of my book group is 91 — and she’s only just stopped going body surfing.’

The book’s themes of self-discovery and second chances are topics Anne knows all about. ‘I could possibly have written a thriller when I was 27, if I’d had nothing else to do or if I was just in it for the money,’ Anne laughs.

‘But I couldn’t have written anything else because I didn’t have enough life experience. By my age, you do start to question things about your life,’ she smiles.

By the time she wrote Meet Me At The Museum, Anne had punched through a few glass ceilings. For 30 years, she worked in the male-dominated motor industry, rising to become chief engineer.

She had studied English at Birmingham University and always planned to write. ‘But it was the early Seventies and I thought I’d go into industry first,’ she says.

‘It coincided with a very early recognition that there weren’t many women in industry — this was in the days when perhaps five per cent of women went to university — so when the motor companies did the milk round, they all had a brief to look out for women. Whoever I tipped up to was going to offer me a job.’

After university, Anne worked for the company making Austin, Morris, Rover and Land Rover vehicles. Women were still seen ‘as an oddity and tended to be shunted’ into ‘soft’ departments such as marketing and HR.

But after a spell in marketing, her bosses reluctantly accepted that as a ‘mere female’ and ‘not even as an engineer’, there might be a role for her in Product Planning, where the next line-up of vehicles was shaped. She was soon running teams of designers and engineers. 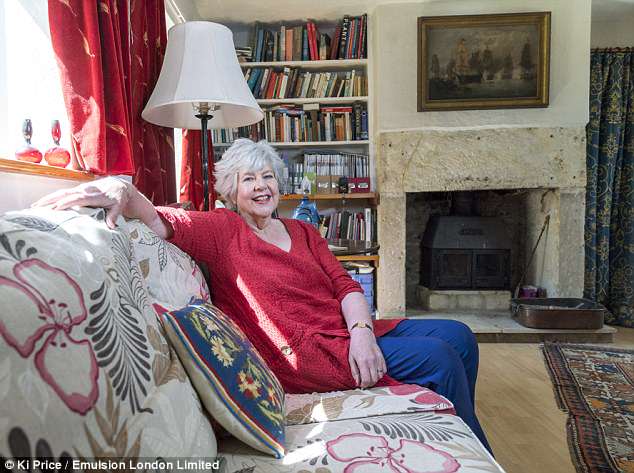 She was also one of the first senior women to take maternity leave. ‘I was a bit of a pioneer. They had introduced statutory maternity leave just before I had my kids [her daughter is 35, her son, 32] so I was the first woman at management level to take it,’ says Anne.

‘My husband was just setting up his own solicitor’s practice so there was no question of me not going back to work.’

Taking voluntary redundancy at 56 changed her life. At the same time, her husband decided to retire and set up a plant nursery. (Their home in Burford, Oxfordshire is open as part of the National Garden Scheme).

So with both of them embarking on a new phase in their life, Anne didn’t feel guilty. She took a two-year undergraduate diploma in creative writing at Oxford University.

‘They made you write everything — poems and plays, short stories. Prose just came so easily to me. And it was encouraging to think: “I’m not just wasting my time here”,’ she says.

At 67, this was followed by a PhD at Oxford Brookes, where she began writing Meet Me At The Museum as a short story. 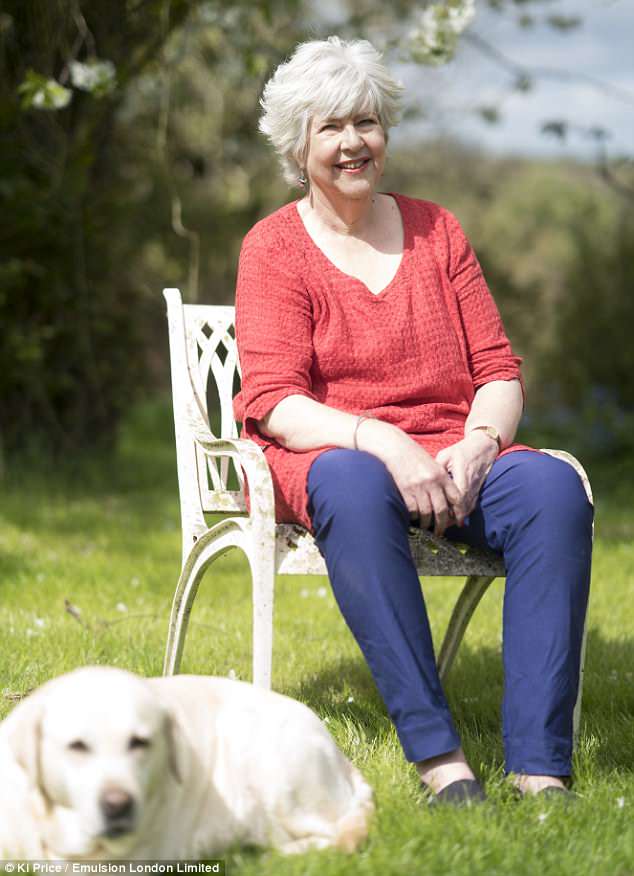 Anne was introduced to her agent by her university tutor after writing 10,000 words. She admits the book reflects some of the things she’s thought during her life experiences

By the time she’d written 10,000 words her tutor introduced her to an agent.

The novel takes place over a year. On an isolated Suffolk farm, Tina Hopgood is trapped in a marriage she doesn’t remember choosing, and is grieving over the death of her best friend.

Meanwhile, in Denmark, museum curator Professor Anders Larsen has lost his wife — and his hope in the future.

Both believe their love stories are over. But when they begin corresponding by chance (Tina writes a letter to his museum), an unexpected friendship blooms as they try to make sense of their life experiences.

In the letters, the couple talk openly about the challenges in their marriages and their complicated relationships with their adult children.

‘Tina is not me,’ laughs Anne. ‘But in the writing she is reflecting some of the things I’ve thought.’ 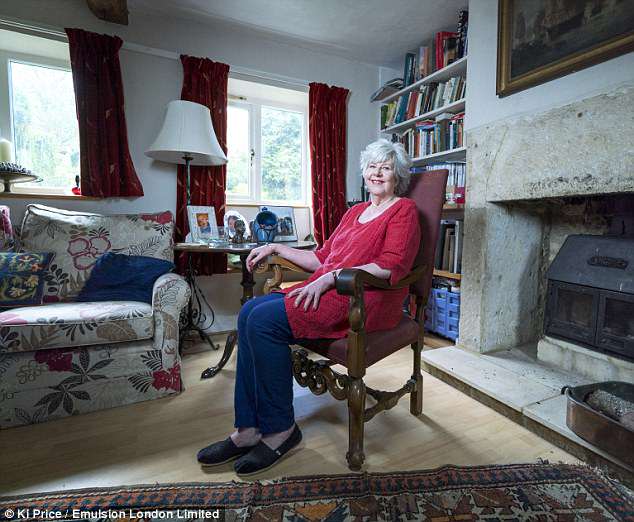 In the novel, Tina is frustrated that she married at 19 and never realised her potential. However complicated it is for modern women to juggle work and family, Anne believes it is far better today.

‘When I went back to my old school ten years ago for an event, and met my peer group, I was shocked by how few of them had gone out and got a job and built a career. The climate didn’t necessarily encourage it. But I was obviously just very stubborn.

‘My own mother’s life was a waste,’ she adds poignantly. ‘I don’t suppose for one moment she thought that, but I did.

‘Born during World War I, she was just a wife and mother. She had the capacity to do and experience and enjoy more than she ever did. She probably thought my life was hugely complicated.’

Her own children are very proud of her success, but she worries about embarrassing them. ‘It made me think of Bridget Jones’s Diary where her mother turns into a completely different person when she gets a job as a TV presenter later in life.

‘Are my children thinking: “Hang on a moment, we’re just trying to cope with young adulthood and relationships and earning a living and then our mother goes and does something bizarre?”.’

She’s flying to America next month to support the book’s publication there, which is certainly out of the ordinary for a debut author. And there have already been approaches for a TV series based on her novel.

And with a book of short stories in the pipeline, there’s certainly no danger of this intrepid 70-something retiree slowing down.