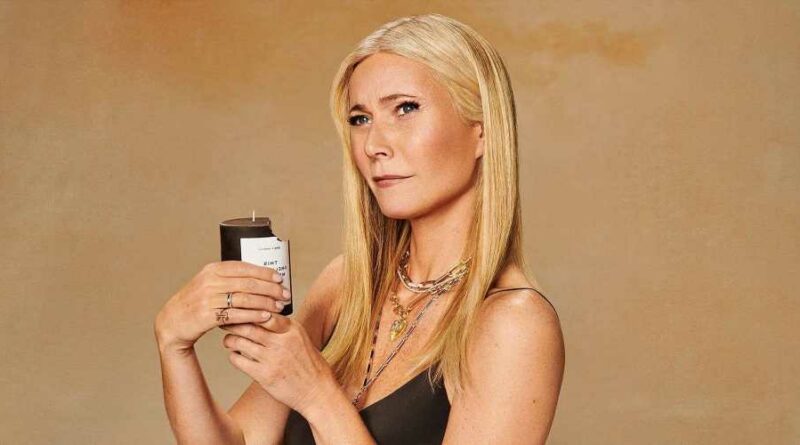 It's not lost on Uber Eats that their name is a bit misleading, so they're using this Super Bowl as an opportunity to clear things up. The brand's new 'Uber Don't Eats' Super Bowl spot, starring Gwyneth Paltrow, Jennifer Coolidge, Nicholas Braun, and Trevor Noah, is a comical reminder that you truly can get just about anything delivered via the app — and some of it should definitely not be eaten.

As part of the campaign, which will air during the Big Game on Sunday, Feb. 13, Uber Eats is also launching a hub on the app where you can stock up on anything you need for the Super Bowl in one place, including groceries, alcohol, and cleaning products. If you need anything for the next day, there's also a Valentine's Day hub for all your romantic eats (and not-eats), like flowers, chocolates, and candles.

And speaking of candles, as of today shoppers in New York and LA can also order a slew of Goop beauty and wellness products to be delivered on-demand, including the brand's iconic vagina candles and bestselling vibrators.

So, how does Goop founder Gwyneth Paltrow celebrate the Super Bowl? And is she also obsessed with Nicholas Braun? We got the exclusive scoop on these important questions and more, ahead.

Did you collaborate with the other actors at any point — and I have to know — did you meet Cousin Greg (Nicholas Braun)?
Unfortunately not at all, I was by myself. I just shot my bit. I did get to meet Cousin Greg, though, in the parking lot on the way home. So that was fun.

Are you a big Succession fan?
Um, I'm more of a cousin Greg fan…I like it. It's a little heavy for me, but I love the relationship between what's his name — Tom! — and cousin, Greg. Oh my God, I could just watch that spinoff show all day.

How will you celebrate the Super Bowl this year?
We usually do it with our close family friends. My husband is a Patriots fan, but he's also a big Tom Brady fan and the dad in the other family is from Kansas City, so I'm kind of glad neither of their teams are in the Super Bowl this year so we can just have fun and eat and relax a little bit. Otherwise, they get so tense and it's literally not fun for anyone else in the family! We don't really play games or do anything special — it tends to be embarrassingly heteronormative; all of us girls will go into one room and have a glass of wine.

Speaking of wine, did you do Dry January this year, and have you tried any of the non-alcoholic alternatives that are so trendy right now?
I was pretty dry all last year and I've been doing a pretty dry January. I had a glass of wine the other night, but I'm planning on kind of doing the same this year. Just minimal drinking and focusing on cleaning up some old gut health issues. I really like this [non-alcoholic spirit] called Seedlip [which is sold on Goop], one is kind of herbaceous and the other is more like a spice one — I have it with some sparkling water and it does the trick for me, cause so much of it is just about the ritual. But I do have [a glass of wine] once in a while on a special occasion and I very well will probably have one on the Super Bowl.

Do you actually get into the football part of things, or are you more watching for the commercials and halftime show?
I grew up watching a ton of football with my dad. And so for a long time after he died I kinda took a break cause it really bummed me out. It was something that we always did together — there are pictures of me lying in the crook of his arm and watching football from the time I'm literally a newborn. So I kind of backed off for a while but now I'm married to a major football fan. I'm a lifelong New York Giants fan, so if the Giants are playing I get more into it or I'll root for the Patriots because otherwise, I think I would be kicked outta my house, but I'm not a rabid football fan. I do enjoy watching it, though, especially when the stakes feel kind of high.

What will you make for the Super Bowl? Do you keep it healthy?
We usually do American food, you know, ribs and coleslaw, sliders, and sometimes we do lobster rolls. Stuff like that. Blue cheese dip is probably the best thing in the whole world, in my book, but there are also some really good like healthy dips we've been making, like this kind of miso one for veggies. But my favorite [Super Bowl food] is nachos. I haven't had those in a while.

Outside of the Super Bowl, what does your family typically order on Uber Eats and how do you all agree on a spot?
We actually order from Goop Kitchen — in Studio City and on the west side in Santa Monica — through Uber Eats a lot. [My husband] Brad [Falchuk] literally orders Goop Kitchen for lunch every single day. Otherwise, we do more local spots — there's a taco place my daughter [Apple] loves and [my son] Moses tends to order, like, a hot chicken sandwich from somewhere. The teenagers never seem to wanna eat the same thing at the same time. I think it's just resistance they have to the other sibling, in general, that comes out in the food order — one wants sushi and one wants whatever else. But Brad and I always order from the same place.

To bring it back to the campaign, some people (myself included!) do not think to necessarily order things through Uber Eats outside of takeout. What do you tend to order on Uber Eats that isn't food?
I just found out that you can order not food on Uber Eats! So I'm gonna be implementing that into my routine.