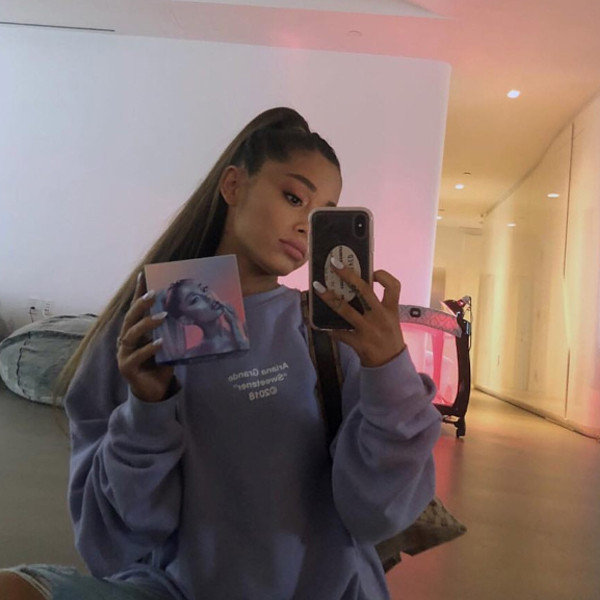 Attention Arianators: There is no need to be on baby watch!

Earlier this week, Ariana Grande took to Instagram and posted a selfie with her Sweetener album. “Cloud @UltaBeauty,” she wrote as her caption while giving a shoutout to her perfume available at the retailer.

As it turns out, people were focused primarily on what was behind Ariana in the photo. Does anybody spot a crib?

“What are you cooking in the crib,” Katy Perry asked in the comments section. Another fan added, “Why is there a baby crib in the back tho?”

At first, the singer had some fun with the line of questions. “My secret child duh,” she replied to the follower. But soon after, she set the record straight.

“That’s Piggy Smalls’ play pen in the background,” she explained. “The red is to keep ha warm.” Ohhhhhh!

For those not up to date on Ariana’s pets, Piggy is the pig she adopted with fiancé Pete Davidson in September. As for how the addition came to be, it happened rather quickly.

“This girl, like, she was like, ‘I want a pig,'” the Saturday Night Live star told Seth Meyers. “And then an hour later it was just there. You know what I mean? Like, I’m still trying, to get, like, a Propecia refill….This chick got a pig in a f–king hour.”

Pete continued, “The first two days it was like really new and, like, didn’t move much. But then, now, it’s starting to bite and, you know, start to do stuff…I love it. I want it to get big and fat.”

And if there is any doubt that this couple is devoted to their pig, look no further than Pete’s body. Yes, the comedian got a tattoo of Piggy Smallz thanks to Mira Mariah at Studi Fleur Noire Tattoo in Brooklyn.