On-screen, the best friendship between Betty and Veronica on Riverdale might be plagued by the occasional scandal, but off-screen, actors Camila Mendes and Lili Reinhart are BFFL. In fact, they even know what their faces morphed together might look like: Mila Kunis apparently. Young Mila Kunis looks just like these Riverdale stars, and once you see it, you won’t be able to unsee it — in the best way.

On July 26, Mendes posted a photo of a younger Kunis to her Instagram Story. She captioned it, "If @lilireinhart and I had a child, it would look like a young Mila Kunis," and fair warning — it will shake fans of Riverdale to their cores. Why? Because this photo has everything. There’s Mendes’ darker hair coloring. Reinhart’s upturned nose. Large, green eyes that fool you into thinking they need protecting, when really they belong to the kids hunting down a serial killer in a small town or like, dating Michael Kelso. Seriously, Kunis looks exactly like a combination of the Riverdale stars. Which begs the question of where did they get this photo, and which friend noticed it first?

Put down the Pop’s milkshake and leave your cheeseburgers behind, because this resemblance is too real: 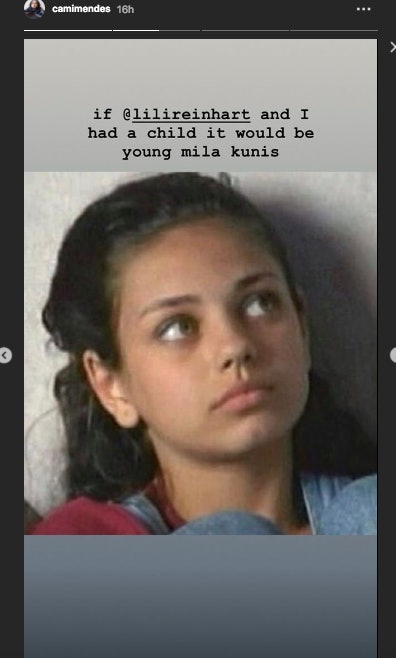 It’s a lot, right? And while the Riverdale stars are all over social media, unfortunately, Kunis is not. She spoke to Cosmopolitan earlier in the year about her decision to stay extremely offline — in contrast with husband Ashton Kutcher, who is ubiquitous — and explained that it was mostly for privacy and protection reasons. As the mother of two young kids, and a public figure herself, Kunis wants to retain as much normalcy in her life (and her children’s lives) as she can. So, whether this photo works its way to Kunis is a mystery. Is it too much to hope that Jackie Burkhart from That ’70s Show grew up to have kids that love Riverdale in some fictional timeline? (Hey, Riverdale has made it clear that it exists in the same universe as Black Mirror‘s San Junipero. Why not throw That ’70s Show into the mix?)

For real, though, the more you gaze at the image of a young Kunis, the more it looks as if someone went and transplanted Reinhart’s face onto Mendes’ body. Still think people are exaggerating? Here are Mendes and Reinhart together for reference.

It’s always amazing when on-screen pals develop off-screen relationships, but the friendship between Mendes and Reinhart has a special place in the hearts of their fans. After all, they brought to life the characters of Betty Cooper and Veronica Lodge, who have been imprinted on Archie Comics lovers for more than three quarters of a century. Things can get emotional for passionate fandoms out here. Plus, you know it’s real, because the cast of Riverdale is all over social media, as previously stated. They genuinely love hanging out together. (That probably explains the incredible chemistry on the show.)

Now that Season 3 is filming — as confirmed by the 2018 Comic-Con trailer — expect even more adorable goofiness from your faves. And here’s hoping Kunis weighs in on her "parents" soon.