Home » Lifestyle » YouTuber reveals £20,000 worth of belongings were stolen 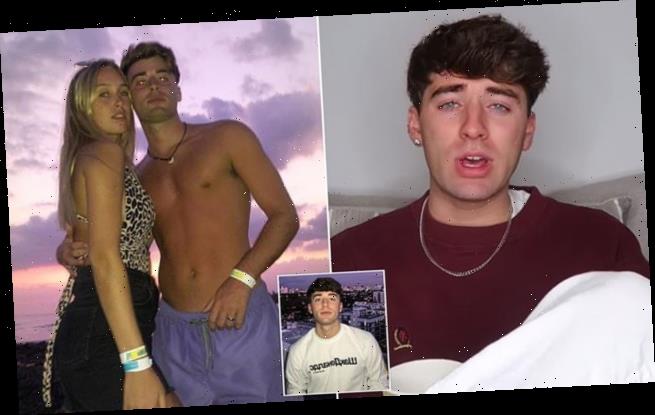 Tearful YouTuber, 22, baffles followers as he claims backpack containing £20,000-worth of belongings including a Rolex was stolen – but says he may not go to the police because the thief must have ‘needed it more’

An influencer has posted an emotional video explaining how he has been left ‘unable to sleep at night’ and ‘crying most days’ after having £20,000-worth of personal belongings stolen.

Carmie Sellitto, 22, uploaded a video to YouTube claiming the items were stolen  after he left them in a backpack in his housemate Millie’s car while they visited their mutual friend Ben’s house in London.

The bag allegedly contained belongings including a Rolex his father saved up to buy him for his 21st birthday, as well as his laptop, camera and beard trimmer, along with his wallet and house keys.

However, he said he didn’t know if he would go to the police, saying: ‘I feel like the person who took my stuff clearly needed it more than me,’ he said. ‘Actually that’s not the case because they stole my camera and my laptop and that’s how I work.

‘The only things I had left were my PS4 and my iPhone luckily – because if I didn’t have any of those things, Oh my f***** God, I would’ve jumped in front of the next moving train.’

Followers rushed to symapthis with Carmie, although some questioned his story, asking why he would leave so many valuable unattended, and pointing out that he doesn’t have a beart. 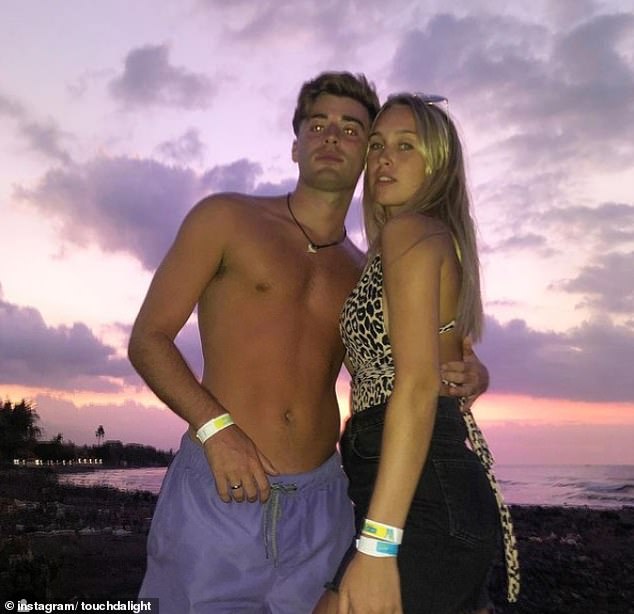 Carmie Sellitto, 22, from Hampshire, who boasts over 687,000 subscribers on YouTube, has told how £20, 000-worth of his belongings were stolen after he left them in a parked car. Pictured: Carmie with girlfriend, Kate Elisabeth

Carmie explained the theft happened when he was driving around with Millie and they decided to park up and visit their friend Ben – who is allowed a social bubble because he lives alone.

Carmie, who had been inside the house for less than two hours when his bag was stolen, said: ‘We went to Ben Morrisey’s place for around an hour-and-a-half. We were literally just chilling in his place and having fun, literally just relaxing and catching up and then we decided to go back home.

‘It was like 5pm and it had just got dark. I had all my stuff in my backpack. I don’t know why but when I’m travelling I like to have my stuff with me.’

Carmie, who told his subscribers that he will be taking a break from YouTube, explained that when they walked out of Ben’s house they discovered his backpack was missing and panicked. 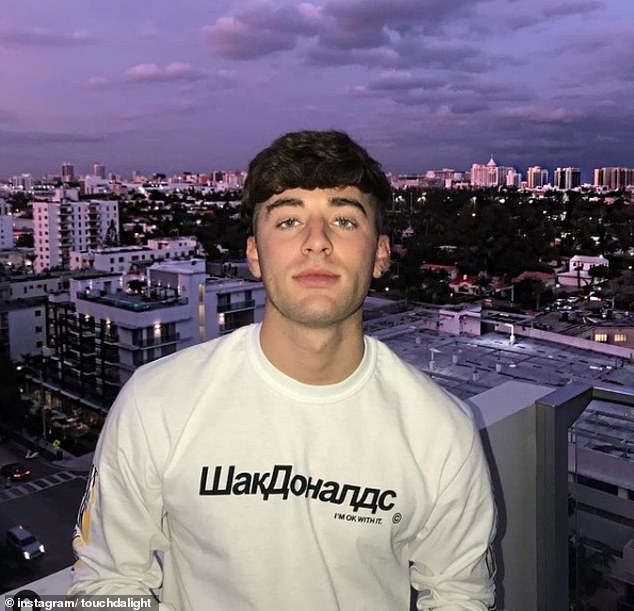 Carmie (pictured) said his backpack containing £20,000-worth of belongings was stolen from his friend Millie’s car

He began listing the eye-watering value of the belongings that had been taken and said: ‘Number one, my designer bag which was like £850. The things I have in that bag, like I don’t wear a lot of designer clothes.

‘But designer items, I tend to spend money on that because I know it will be better in the long run. When you spend your money on things that will be beneficial in the future instead of clothes, it makes sense.

‘Anyway, I had my wash bag stolen, which had my beard trimmer, my shaver…I couldn’t shave my beard. Today is the first day that I could shave my beard because I had to buy one off Amazon.

‘I couldn’t even use my own card because my wallet got stolen as well. I had two wallets in that bag with my ID, with my home address and all of that stuff.

He continued: ‘I had my car keys taken, my laptop, my camera and this is where it gets bad. I had my 21st birthday present that my dad spent so long saving up for- he basically bought me a Rolex watch.’

Carmie revealed the watch was worth an estimated £13,000 – adding that he’s struggling with the feeling of losing a gift that costs so much.

He continued: ‘The fact that I had to ring my dad and the first thing I said to my dad is: “I need some help on whether to call the police or not.”‘

‘My dad goes “What’s up, what have you done?”  I told him everything and then I had to tell him about the watch that I had got stolen.

‘My dad was genuinely so upset and my heart kind of breaks a bit. I can’t believe this is kind of my fault.’ 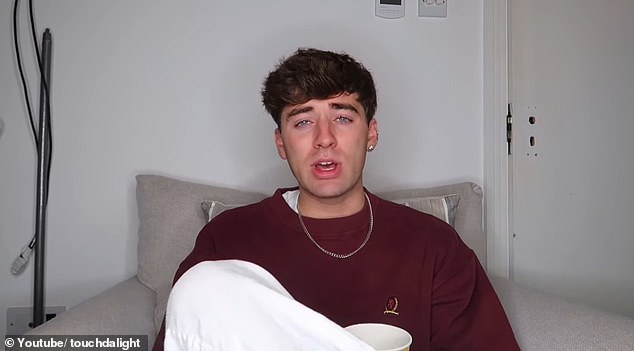 Carmie added the person who stole the items would’ve been filmed on the camera in Millie’s car, but he’s unsure if he will be ‘pressing charges’.

He explained that when his trainers were stolen as a child, his father taught him whoever took the item probably needed it more.

He went on to say his friends had to convince him to call the police, however they were reluctant to give him advice about what to say because they were arguing among themselves about their food order.

‘The priorities of these people – I have no chill,’ he said. ‘And then it gets worse. I wake up the next morning and I tell my sister about it. My sister handles all my stuff, so you can call her like a personal assistant. 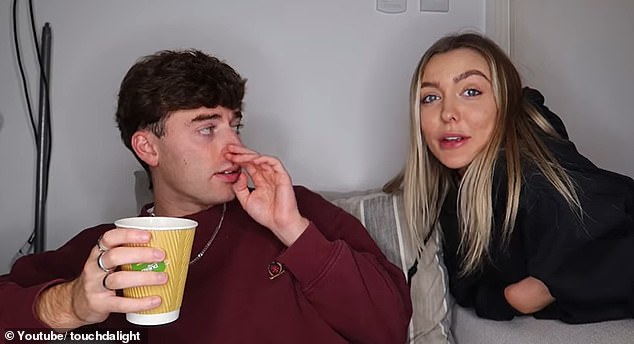 Carmie said he received a phone call from someone pretending to work for HSBC after his wallet was stolen. Pictured: Carmie with YouTuber Millie

‘She cancelled my card which was with TSB. I’m not sure how much of this I can say because I don’t want to leak my stuff.

‘But I have another card for HSBC and I get a call from HSBC the next morning and this guy starts being really sketch on the phone. The number he called me on was also very sketch and he was basically asking for loads of my details.’

Carmie said he became aware the call was fraudulent after realising the person called him by his full name, which would only be known by someone who has his card.

He revealed the person on the phone began asking for his full address as his sister urged him not to give any more information.

The YouTuber claimed the person used a recording from HSBC’s phone line to make their voicemail seem legitimate. 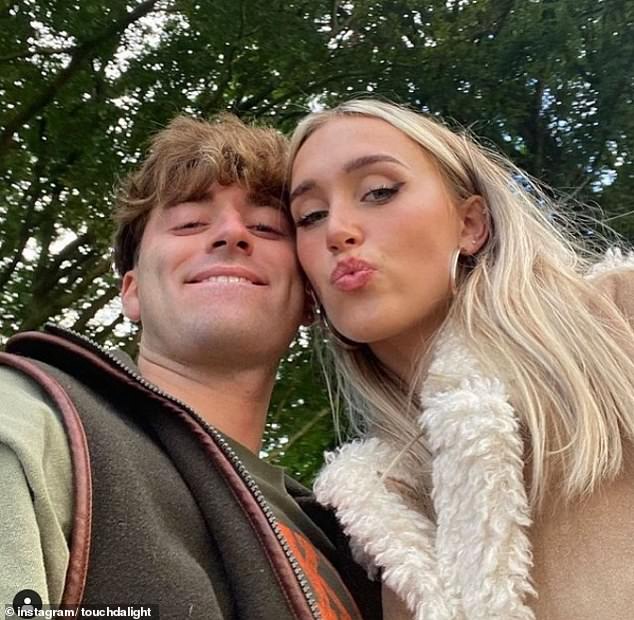 Carmie explained he and his household are fearful that the thief may try to gain entrance to their home. Pictured: Carmie with girlfriend Kate Elisabeth

He added that they now don’t feel safe in their house and it’s not the first time strangers have tried to come to their home.

‘I wanted to go back to my family home but then lockdown hit, so I’m literally stuck here,’ he explained. I wouldn’t want to leave Millie and Spencer alone here, knowing someone could be potentially coming to my house to steal more of my items.

‘I can’t physically explain how I feel, I haven’t been able to sleep at night and I’ve been crying most days. I’m not even the type of person to cry.

‘I don’t know what to do anymore, I’m probably not going to be able to make YouTube videos for the time being because I don’t have a laptop, camera or SD Card.

‘Oh. And they also stole my SD Card which had around 264 GB of content of me and my friends.’