Home » Lifestyle » Zendaya wore an elegant dress with a plunging neckline for the virtual Emmys, and promised it wouldn’t be the only look of the night 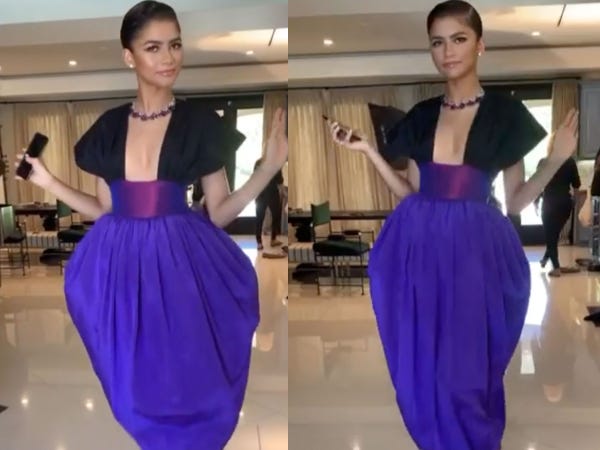 Zendaya has become a red-carpet favorite over the last few years, and a virtual ceremony didn't stop her from bringing major elegance to the 2020 Emmys on Sunday.

The "Euphoria" star, who received her first Emmy nomination this year for her role as Rue Bennett in the HBO show, took to Instagram to show off her gorgeous Christopher John Rogers ensemble.

Zendaya did a little spin in the dress — which had a black top with a plunging neckline and a silky purple taffeta skirt — for a short clip on her Instagram story.

She wore her hair back in a simple updo and paired the look with glittering Bulgari jewels.

And the actress hinted that there was more glam to come, writing in the caption: "And so it begins … Look 1."

She posted another "sneak peek" on her Instagram story, sharing a close-up of more glittering jewels.

💜😈🕺🏾The muse, @zendaya, by @luxurylaw in FW20 moire and silk taffeta with @bulgari jewels for good measure! 🍆☂️🦄

Zendaya recently sported another Christopher John Rogers dress in InStyle's September issue. She exclusively wore Black designers for the cover shoot, which was a first in the magazine's history.

"There are also so many Black designers people don't know about, so having the opportunity where they can be in InStyle and get the love they deserve is really special," Zendaya said during her interview for the magazine.

Executive producers for the Emmys told attendees in July that the virtual show's dress code would be "come as you are, but make an effort!"

But Zendaya revealed last month that she had no plans to just wear her pajamas during the ceremony.

"I do want to dress up. I still want to have the experience," she said during a recent appearance on "Jimmy Kimmel Live."

"It'll be probably just my family over here," she added. "But I definitely want to pull a look and maybe just walk my living room carpet."

Girl, 3, hospitalised with gunshot wound after drive-by shooting at arcade