The 30-year-old singer and reality star was joined by her attorney Lisa Bloom at a press conference on Thursday (May 17), where she accused 50 Cent of re-posting a sexually explicit image that was shared without her permission on her own Instagram account as well ex-boyfriend Akbar Abdul-Ahad’s page.

Mari told reporters that Akbar Abdul-Ahad maintains that he was not the one who originally posted the explicit image, rather that someone stole his phone. The offending image appeared online days after the couple split up.

Abdul-Ahad later took down the photo, Mari says, but Buzzfeed reports that it was Instagram that originally deleted the image from 50 Cent’s page, leading to an online rant from the rapper over censorship. 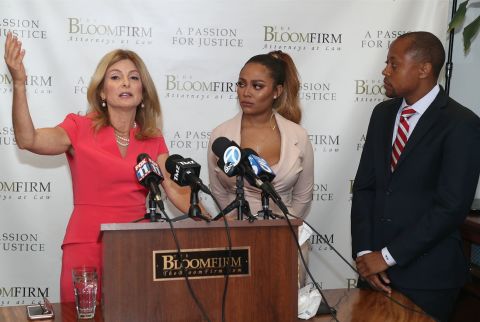 “I’m heartbroken,” Mari told reporters. “I loved this man [Abdul-Ahad]. He is saying that he didn’t do it, but I know in my heart that he did. Even though I want not to believe the lies, I have to stand up for myself so that people don’t believe that I did it.”

Power star 50 Cent has been in Cannes in recent days for the international film festival, where he’s made headlines for performing with actor John Travolta.