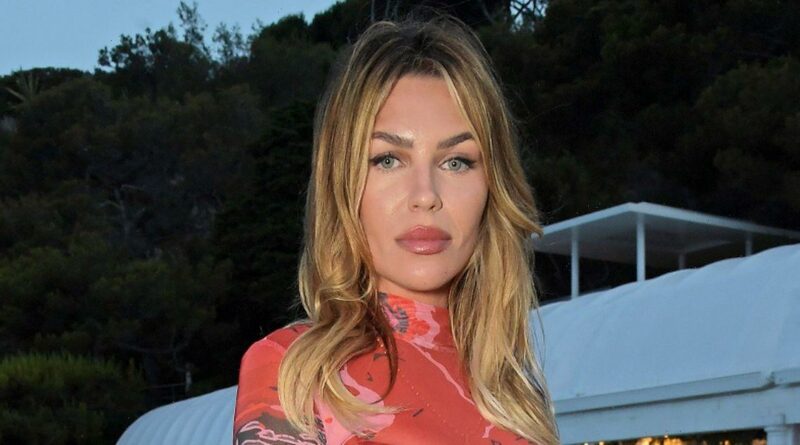 Abbey Clancy showed off her sensational figure in a sheer red patterned bodycon dress at the unveiling of a mural in France on Thursday.

The model, 36, and her former England footballer husband Peter Crouch were all smiles at the big reveal of The Journey by Sassan Behnam Bakhtiar, which was presented by Ali Jassim.

Abby's glitzy outfit drew attention to her slender physique as she stepped out at The Four Seasons Grand-Hotel du Cap-Ferrat.

Abby put her cleavage on display in a black bra underneath her dress and allowed her delightful blonde tresses, which she styled in waves, to fall onto her shoulders.

She finished her look in pair of clear heels and accessorised with a draping diamante necklace.

Abbey accentuated her striking features with a smidgen of eyeliner and a slick of glossy pink lipstick.

Meanwhile, Peter looked dapper in black trousers, a white t-shirt a navy double-breasted jacket, and a pair of loafers.

At the glam bash, Abbey posed up a storm with Amber Le Bon and Tinie Tempah, who looked suave in a pair of cream trousers and a mesh shirt. The swanky event included a private cocktail reception and an exclusive dinner for 140 guests in the Club Dauphin restaurant.

At the bash, the Mayor of Cap Ferrat made a speech celebrating Behnam-Bakhtiar and his work.

Guests tucked into a lobster salad with a tomato vinaigrette, roasted veal chop with basil and parmesan risotto. After enjoying the delicious slap-up dinner, guests enjoyed the grand unveiling of the mural and then let their hair down at a party at one of Ali Jassim's, which was just down the road from the hotel.

Earlier this month, Abby set her fans into a frenzy after showing off her stunning physique in a bikini from her new sustainable swimwear collection with F&F Clothing.

Abby shared a snap on Instagram whilst at the beach, showing her wearing a colourful striped bikini.

The bombshell posed in the sun with a straw hat to promote her new range of swimsuits, bikinis and coverups.