For a band with four guitarists, West Thebarton certainly know the appeal of a definitive central riff to a rock song. On the Adelaide group's debut album, Different Beings Being Different, one track after another nails a guiding guitar part to a defiant backbeat.

The sweaty legacy of classic Australian pub rock is often cited in descriptions of the band, but the seven-piece's strength is the way they transcend any and all of their eclectic influences. 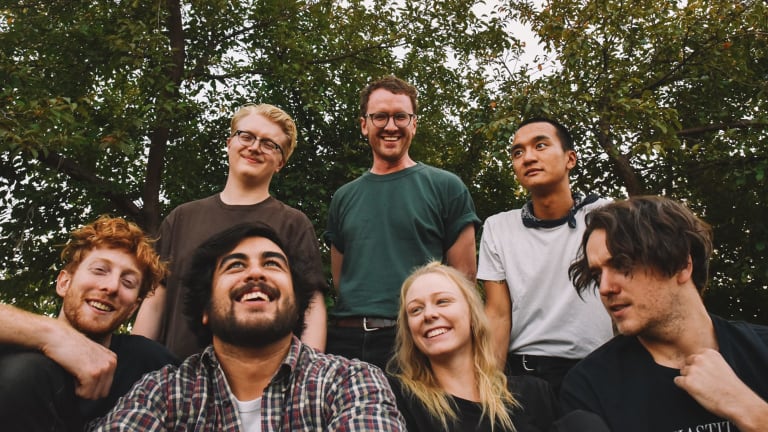 West Thebarton head to Britain after their forthcoming national tour.

"We're just trying to write the best song possible," says guitarist and percussionist Brian Bolado, "and we just wanted to make the best record we could."

The joyous, condensation-dripping-from-the-ceiling, attack of Different Beings Being Different is the conclusion of a journey that began on Australia Day 2013, when the first incarnation of the band played a debut pub show where more people were on stage than in the crowd. Having previously shared gigs with various band members, Bolado was one of the first fans, soon jumping on stage to add percussion and then attending rehearsals.

"I thought to myself, 'It would be really great if I could do something with this band', and that stands out for everyone in the band and in our community. We love what we're doing," says Bolado, who now plays alongside guitarists Josh Healey, Tom Gordon, Josh Battersby-Gordon, drummer Caitlin Thomas, bassist Nick Horvat, and vocalist Ray Dalfsen in a line-up that's built a growing national profile over the last 18 months.

"The band has really helped me at various points in my life, and it was the same for others," Bolado says. "I was working in not the greatest full time job, just trundling around and tolerating things, and the band showed me that if you're not making the most out of what you're doing then there's not much point in doing it each day."

The ignition switch for their performances is Dalfsen, a singer whose husky howl acquires a soulful yearning on tracks such as Reasons and Ivan. Nicknamed Rev, the singer has come into his own as a focal point for audiences.

"I think Ray came out of the womb screaming," Bolado says. "I haven't ever known a placid Ray at any second on stage. Even in his previous bands he had an electrifying presence, and me taking over some of his guitar parts has let him flourish as a frontman. He's just a natural."

After their forthcoming national tour West Thebarton make their debut in Britain with a series of introductory gigs and festival appearances. Having just received the vinyl pressing of their album – "it's the closest we've come to holding our own children," notes Bolado – a band founded on the pleasure of playing together is notching up milestones and changing perceptions of their hometown.

"Adelaide is often considered a backwater or afterthought, but a lot of great music stems from here: this is where Paul Kelly and Barnesy grew up," Bolado says. "But now people have realised that we don't have to move to Sydney or move to Melbourne to be great. If you put in the hard work here it shows."