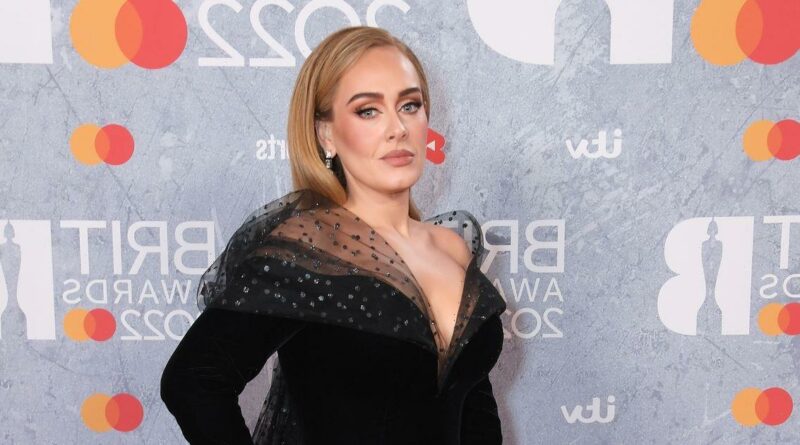 Singer Adele will be performing at the BRIT Awards for the first time following her decision to axe her Las Vegas gigs.

The star looked nothing short of incredible as she wowed the crowd on the BRITs 2022 red carpet.

Adele opted for a dazzling black gown which plunged at the centre and saw organza material spill over the shoulders as she donned a slight off-the-shoulder look.

The singer was also seen sporting a stunning diamond as she opted for a big ring on her finger and paired the look with some earrings and a simple necklace to finish.

Her luscious locks were pulled back into bouncy curls as she opted for a full and glamorous makeup look with pink hues on her lids and lips.

Fans were happy to see Adele in attendance after she was forced to cancel her gigs in the US.

She will be performing at the BRITs which will air on ITV this evening at 8pm.

The annual music awards show is being hosted once again at the O2 Arena in London, hosted by comedian Mo Gillighan.

The soulful singer has nominations in four categories — including album of the year for her album 30, Artist of the Year, Song of the Year for Easy on Me, and Best Pop/R&B Act.

Adele, 33, is set to make a return to live performance at this year’s Brit Awards ceremony. Other artists scheduled for Brits performances include Dave, Ed Sheeran, Holly Humberstone, Little Simz and Liam Gallagher. Doja Cat was booked but was forced to pull out after members of her team contracted Covid.

Adele’s Brits appearance will be her first performance since her One Night Only TV special last year.

She was due to embark upon her Las Vegas residency last month, but was forced to postpone the shows, blaming delivery delays and Covid

Adele faced backlash for a recent Twitter post announcing her performance at the BRITS following the postponement of her Las Vegas residency.

She posted: “Hiya, so I’m really happy to say that I am performing at the Brits next week!! Anddddd I’ll also be popping in to see Graham for a chat on the couch while I’m in town too!” she said.

Fans of Adele have labelled her post to be “tone deaf”, with many questioning if she “just forgot about the Vegas shows”.

Last month, the singer postponed her exclusive new residency at The Colosseum at Caesars Palace Hotel just 24 hours before its opening night.

“What about all those people that have lost money because you cancelled at the last minute. Where is their performance?” one fan wrote.

Another fan added: “Are you actually going to show up, I am out $2500 USD for flights and tickets.”

“Hun probs not the best idea to brag about this when you and your team haven’t refunded fans for Vegas,” an angry fan wrote.