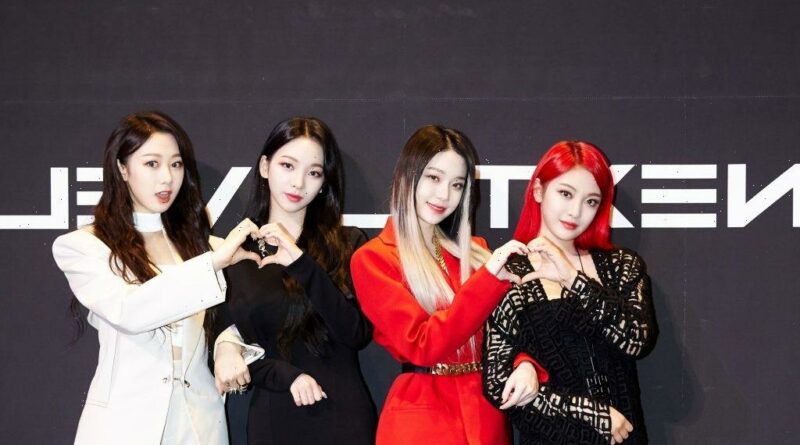 aespa is SM Entertainment‘s newest girl group, and members KARINA, WINTER, GISELLE, and NINGNING debuted as aespa in 2020 with the single “Black Mamba.” On May 17, aespa released their new single “Next Level.” In the hours before the song’s release, the K-pop group held a press conference to discuss the single and their future plans.

aespa debuted with SM Entertainment in 2020

The name aespa comes from combining “ae” (Avatar and Experience) with aspect (two sides). Each member of aespa has a virtual avatar counterpart, and the K-pop group’s concept features a “real world” and a “virtual world.”

On Feb. 5, KARINA, WINTER, GISELLE, and NINGNING released a single called “Forever,” a remake of a song by SM Entertainment artist Yoo Young-jin.

Leeteuk of SM Entertainment group Super Junior hosted aespa’s press conference for “Next Level.” The K-pop group’s newest single is a remake of a song by the same name from the soundtrack of the movie Fast & Furious: Hobbs & Shaw.

“‘Next Level’ is groovy and energetic with a dynamic musical arrangement. We tried to bring out more power through our voices. Our powerful vocals combined with the point choreography we showed you a little earlier, you can look forward to an even stronger performance,” KARINA shared at the press conference.

At aespa’s press conference for “Next Level,” the group previewed the song’s music video and a performance video that shows the song’s choreography. Even though aespa’s new single is a remake, the lyrics and music video connect back to their debut single, “Black Mamba.”

“Yes, ‘Next Level’ is about going on an adventure to ‘KWANGYA’ to fix the problem caused by ‘Black Mamba,’ who disturbed the SYNK between us and ‘ae.’ We wanted to continue the story from our debut single, ‘Black Mamba,’” NINGNING said.

What should fans expect next from the K-pop group?

Looking ahead, aespa have plans for the immediate future with “Next Level.” Specifically, the group wants to connect with fans as much as possible.

“… it’s unfortunate that we can’t meet our fans in-person right away but we’re trying our best to communicate with our fans on various
social media platforms and through our YouTube contents. TikTok is one of the channels we are very active on and we’re planning on bringing our ‘Next Level’ challenge soon, which incorporates the point choreography you saw earlier,” said KARINA.

So far, aespa have released three singles. At the press conference, the band promised that an album will be released soon.

“It’s coming your way soon!” NINGNING said of the album. “We’re working really hard on it to provide our fans with a rich collection of songs so please wait just a little longer.”