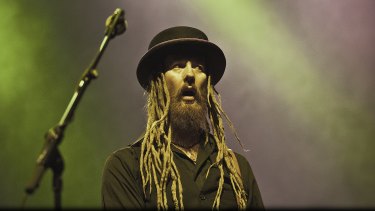 Why is so much exceptional television, cinema, music and more generated by the tiny populations of the Scandinavian countries? Could it be that they've been better than most at balancing the conflicting demands of the individual and the community, and that there's a relationship between art and empathy? Could it be that they have been better than most at valuing the worth of the arts in the wider community? (Cue croaks of derision from the toads who only understand the arts as businesses, not as the expression of the collective soul of the people.)

Take Afenginn​. This Copenhagen-based ensemble, led by composer Kim Nyberg​ (from Finland), sails across a breadth of musical ambition to echo the Vikings' seafaring curiosity. While the band also has a wildly rambunctious side, here it was in more pensive mood, reminding us that no one enacts sonic sparseness like those who come from or near the Arctic Circle. Here were six musicians trying their damnedest to sound like less than half that number in performing material from their forthcoming seventh album, Klingra.

Initially Nyberg​, Danjal​ a Neystabo​ and Kristoffer​ Nybye​ were all playing keyboards; all sounding like the shadows of each other's ghosts, while violinist Alexander Kraglund​ and cellist Adam McKenzie bowed simple, overarching melodies. As the two-part suite developed drummer Knut​ Finsrud's​ flair for orchestration was allowed to take the foreground, while Nybye​ swapped to clarinet, and the ensemble made hypnosis an art-form rather than a psychiatric methodology.

After Klingra​ Nyberg​ (who also played electric mandolin) then took the band back to a movement from the last album, Opus, in which a frenzy of angst unfolded across the ensemble in slow motion, compounded by Finsrud's​ potent drumming.

The vaguely decaying grandeur of the Palais​ Royale's​ ballroom suited this sonic world in which Scandinavian, Jewish and Gypsy elements collided with that amorphous, evocative entity called "film music", exemplified by such near-geniuses as Rota, Komeda​ and Morricone​, to make music of austere elegance and intelligence.