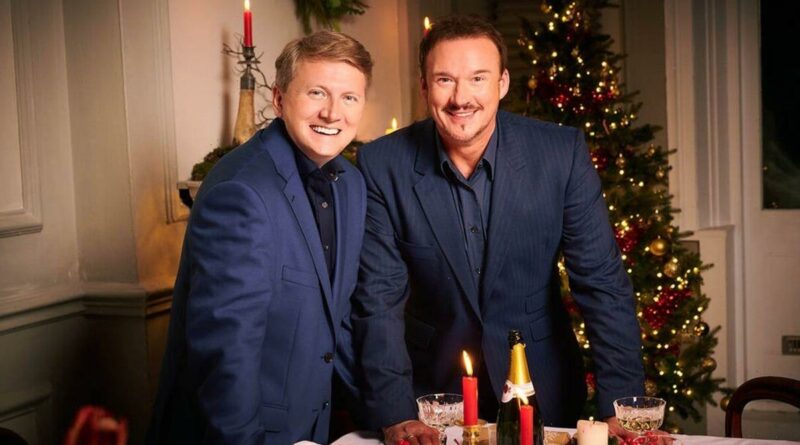 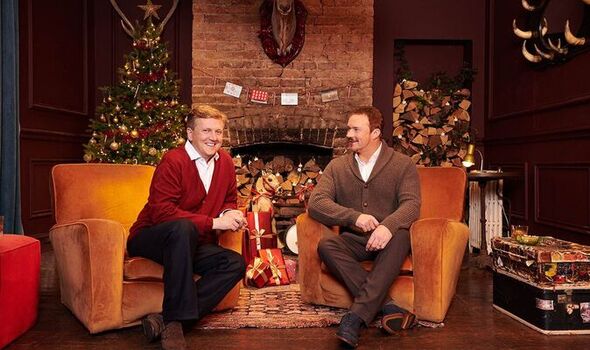 “Morecambe & Wise were very funny. With Al and I, it’s just banter. When we’re backstage we’re constantly taking the mickey out of one another. Everyone asks what we’re laughing about.”

Now the men with the golden lungs are back with their first-ever Christmas album. It’s their third studio collaboration, and “The best one we’ve done,” says Aled. “But we would say that, wouldn’t we?”

Just released, Christmas with Aled & Russell, is a cracker, as classy and congenial as the singers themselves.

The twelve tracks range from the sacred, O Holy Night, to the more saccharine, Mistletoe & Wine. They also take on Walking In The Air, the song from the 1982 classic animated film, The Snowman, that made Bangor-born Aled a schoolboy star.

“It was quite strange making the album,” says Russell. “We recorded it this summer when it was 38 degrees outside. I’m singing ‘I’m dreaming of a white Christmas’ and outside I could literally see steam rising.”

Aled adds: “I was in shorts and a t-shirt singing In The Bleak Midwinter…”

He goes on, “I recorded my vocals in Acton, the Vegas of west London.”

Russell: “I recorded mine in LA… Lower Accrington.”

They laugh and Russell says, “I do feel sorry for people who work in department stores over Christmas though and have to listen to the same songs over and over, especially as the festive period is expanding all the time.”

Aled, “Once I left a store because of it. I’d go in and I’d hear Cliff’s Mistletoe & Wine, then Slade, and I’d know Walking On The Air would be next… But I love all the Christmas songs, Chris Rea, Wham!, Wizzard… they’re all magical.”

All of them? Did you never hear Funky Funky Christmas by New Kids On The Block?

“There must be a filter on my playlist,” quips Russell, deadpan.

They make an odd couple, the People’s Tenor and The Snowman. Urmston-born former bolt-cutter Watson is a dramatic operatic tenor while Aled is a lyrical baritone. On paper, their voices shouldn’t click. Yet on stage, the blend is incredible. Working together has taken their careers into uncharted areas – and arias

“My voice isn’t influenced by opera, whereas Russell’s very much is,” says Aled. “I’d never sung anything like Volare before we recorded together a few years ago but it came out great. It even surprised us.”

The stars reunited at the Welsh national Eisteddfod this summer after an 18month break. “It was like it always is – lots of laughter, loads of banter,” says Russell, who turns 56 later this month. “We have a very similar sense of humour.

“I have never been one of these red-carpet events guys. I only have a couple of friends in the industry. Ours is a good friendship. We’re mates. I feel comfortable talking about anything and everything with Al.”

Aled: “Me too, exactly the same; such good fun.”

Timing issues can niggle though. “I was born late and if soundcheck is at 3pm, I’ll be there at ten past, and he’ll be there at ten to,” admits Russell. Except at Proms In The Park when Watson was on stage, and his singing partner was nowhere to be seen.

“The stage manager said, ‘I’m sorry we’ll have to put you on without Aled’…”

“I had a taxi driver who went all the wrong way,” explains Jones, 51. “I’d missed the soundcheck and it was getting close to stage time. I literally arrived as he was about to sing, and ran on stage. I was in trainers and jeans!”

“I said, ‘Thanks for turning up’,” laughs Russell. “We got it done. I was worried though. I could just about get away with Volare on my own, but the rest were duets.”

The son of a steelworker, brain-tumour survivor Russell, “sings like Pavarotti and entertains like Sinatra”, according to the New York Times.

He has performed for three presidents, one pope and assorted Royals, and is the biggest-selling classical crossover singer of our times; yet he remains resolutely down-to-earth.

Aled became the world’s most successful boy soprano at 12 and has notched up than forty gold, silver and platinum discs. The pals first met at the Royal Albert Hall in 1999, but only teamed up in 2018, going on to notch up two Top Ten albums.

Both maintain that they’re not joined at the hip, although Aled says they might start writing together next year.

First though is the UK tour – 21 dates, starting at Manchester Opera House on November 13 and ending at the Fairfield Hall, Croydon on December 12.

“Every night will be different,” says Aled. “The set is the same but with the banter, anything could happen…”

Anything except an appearance by the Traffic Cone – Aled’s alter ego on ITV’s inexplicably popular The Masked Singer. “That costume has gone back,” he insists.

During the show’s run, Russell came across a huge line of traffic cones on the M6, and sent a picture to Aled with the message, “Look you’re multiplying!”

What next? “Al has got Classic FM and Songs Of Praise; I’ve got solo projects ahead which we’ll announce soon. I might do another musical,” says Russell, who played Billy Budd in Chicago for three months this year.

Aled: “The good thing about Chicago, is Russ’s dancing improved.”

“Marginally,” says Russell. “It’s okay when someone is telling you what to do. We don’t dance, we do movements and embellishments…”

The star claims he only started moving on stage “to dodge the bottles” when he played rough pubs in Wythenshawe 30 years ago.

“You’re better when you’ve had a drink,” Aled observes.

Russell: “I think I could get Strictly. I’ve watched Tony Adams. I could do that.”

He survived ITV’s I’m A Celebrity last year. How was the rancid rotisserie?

“Vile,” he says. “Face down in a vat of blue batter – cheers for that! Growing up in Salford, the ice was always on the inside of the window but that…I assumed it’d be room temperature. I went straight under this freezing cold batter and sucked it up, right up my nose. I thought I could regurgitate this. It’s pancake juice, we can have pancakes tonight for dessert…”

After the tour, comes Christmas. “I’ll be having a 100% traditional family Christmas,” says Aled. “I love nothing more, just closing the door on the world and enjoying it.”

Russell: “I’m exactly the same. We shut the front door and that’s it. We don’t watch a great deal of telly over Christmas. Predominantly it’s about getting together.”

Russell, who has two daughters from his first marriage, lives with his second wife Louise in Cheshire.

“My wife is Christmas mad,” he says. “The planning starts any day now, buying new decorations. Our house is like the Blackpool illuminations, Xmas trees decorated to the max, a big illuminated snowman statue…needless to say, I sent a pic to Aled – ‘we’ve got your mate over’…”

He laughs and adds, “I do like Christmas but I always get this feeling of melancholy. I miss my grandparents, but my wife soon snaps me out of it.”

Aled married circus trapeze artist Claire in 2001. They have a son and a daughter – actress and singer-songwriter Emilia – and live in London.

His festive plans include “eating a lot and watching rubbish on TV”. He says, “I used to love Only Fools & Horses specials, which guaranteed many laughs. We don’t have those big situation comedies anymore but we’ve still got the movies Home Alone, Elf and all that.”

Might the two of them not fancy hosting their own Christmas TV special?

*Christmas With Aled and Russell is out now via BMG.