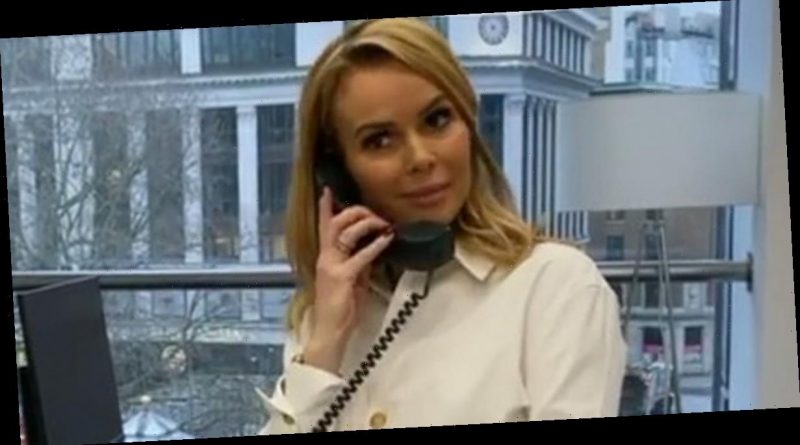 Amanda Holden came dangerously close to a dreaded wardrobe malfunction on Thursday after showing off her latest outfit online.

The Britain's Got Talent judge, 50, turned up the heat once more with her daily catwalk show in the Heart Radio offices.

Like clockwork, Amanda takes to social media to proudly flaunt her outfit of the day.

Thursday's look saw her opted for an all white angelic look – though her antics were anything but.

In a short boomerang clip, Amanda can be seen perched on the edge of her desk while pretending to answer the phone.

Sticking out her killer pins, Simon Cowell's ITV co-star sent imaginations into overdrive as she teetered on exposure.

Leaning back her already short skirt began to ride up meaning she was just millimetres from exposing far more than she intended.

Ever the joker, Amanda simply captioned the upload: "Holden on the line:"

She signed off the post with a red heart emoji.

Amanda's post was quickly flooded with messages of lust and adoration from her army of supporters.

One fan wrote: "Those pins are amazing."

A third gushed: "Such a beautiful and see babe."

Amanda is set to have a more laid back 2021 than previous years after the decision was made to axe Britain's Got Talent.

Bosses decided last month that it would be all but impossible to create the show amid the ongoing government social distancing guidelines.

Also, with global travel constantly up in the air, fewer acts would have been able to jet in from overseas to take part.

That being said, Amanda still has her new BBC show I Can See Your Voice alongside Jimmy Carr and Alison Hammond.

The new series will be hosted by Paddy McGuinness and is taken from a popular South Korean format.

Talking about the upcoming venture, Amanda said: "I’ve seen first hand over my many years as a judge, how acts can shock you with an incredible voice.

"With my experience on stage, television and radio I think I have one of the best pair of eyes in the business for spotting talent so the masqueraders will really have to up their game to fool me!"