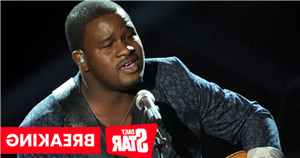 A family member has told TMZ that he had a heart attack on 15 January in Jasper, Alabama.

He was taken to the hospital but the former reality star didn't make it.

Harris rose to fame during season 13 of the competition and left a lasting impression on judges Jennifer Lopez, Keith Urban and Harry Connick.

CJ blew them away in Salt Lake City with his rendition of the Allman Brothers Band's song Soulshine.

Urban famously told Harris: "You sing 'cause you have to sing, not 'cause you want to sing. And, I mean that in the deepest way. And, that's why it's so believable and real."

Lopez also admitted that she "really liked" his sound and Connick also told him: "There’s something about the entirety of what you are, it’s really a vibe that you have that was very pleasant."

After his audition, CJ continued on to show off his powerful voice with songs such as Too Close, American Woman and Free Fallin' before he impressed them so much that he was chosen as a wildcard in the semi-finals.

He went on to make it into the top six before he was unfortunately eliminated from the competition.

After his appearance on American Idol, he sang with Darius Rucker and played during the show's season 13 tour of the country.

During his time on the show, CJ spoke about his son and admitted that it was important to have time with him.

Jordan helped the aspiring singer put his career into perspective and Harris showed his sweet, family-man side.

He spoke to People Magazine about Jordan and said: "It really helped me out a lot to get away and have my son with me […] I would get done with my day around 7pm and would run over there and stay with him until around 1am."

CJ continued: "It reminded me that I have something to do. I just stayed focused on working on my pitch and my rhythm on my guitar. I loved spending time with him because I don’t know when I’ll see him again."