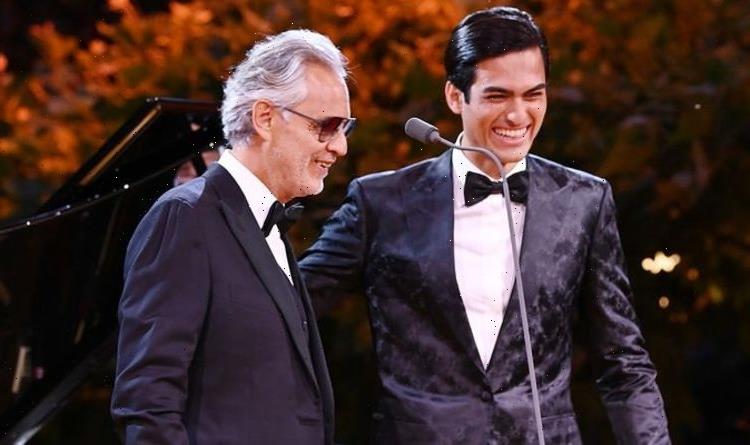 They’re not quite the all-singing Von Trapps. Yet. Andrea’s burgeoning singing dynasty was out in full force and even fuller voice last night on the latest leg of his current US Tour. Although Virginia is still only nine years old, she is accompanied by her mother, Veronica Berti. The precocious young girl shows impressive composure and vocal skills as she duets with her father on Hallelujah each night. Matteo, however, was “very nervous” last night, according to his dad. WATCH THE VIDEO BELOW.

At one moment during last night’s show, Andrea told the crowd: “A young guy, a young boy is among you, who likes to sing. I know him very well because he is my son, Matteo. He would like to share the stage with me. Come on, Matteo.

“I know he is very nervous, because this is The Hollywood Bowl.”

Andrea went on to reveal the moment when Matteo confessed his hopes and dreams for his future.

Andrae said: “The day he became taller than me, I said, ‘What do you want to do in your life?’ And he said, ‘I would like to sing like you.’ I said, ‘OK. Let me listen to something.’ And he sang something to me and at the end, I said, ‘Not bad.'”

As the crowd laughed, Matteo was shown on screen, grinning in the audience, before Andrea proudly added that his son is snow studying at a music conservatory and then called out:  “Matteo, come here!”

As the tall and handsome 24-year-old made his way through the crowd, fans screamed and reached for his hand. It seems he is fast becoming an idol, just like his father

DON’T MISS
Matteo Bocelli: ‘Why I feel fragile and lonely’ plus new song Solo
Andrea Bocelli: Why he made son Matteo wait years to sing
Andrea Bocelli sings with wife Veronica, calls her ‘my beautiful love’

Andrea added: “He recorded a beautiful song, Solo. Solo means alone. Probably because he suffered loneliness when I was around the world and he remained at home. He has written this beautiful song Solo, and now he remains solo on this stage…”

After an affectionate greeting, Andrea then left the stage and let his son have his moment to shine.

During the show, the father and son also delivered beautiful duets on their version of Ed Sheeran’s Perfect and their own single, Fall On Me, from the soundtrack of Disney’s Nutctracker and the Four Realms.

Andrea also performed some of his most popular concert showstoppers from La Donna E Mobile and Nessun Dorma to Time To Say Goodbye.

During previous Hollywood Bowl concerts Andrea has brought out superstar guests like Jamie Foxx, who performed the Frank Sinatra classic My Way with him in 2019. This time he was also joined on stage by Oscar-winner Jennifer Hudson for a rousing version of Amazing Grace.