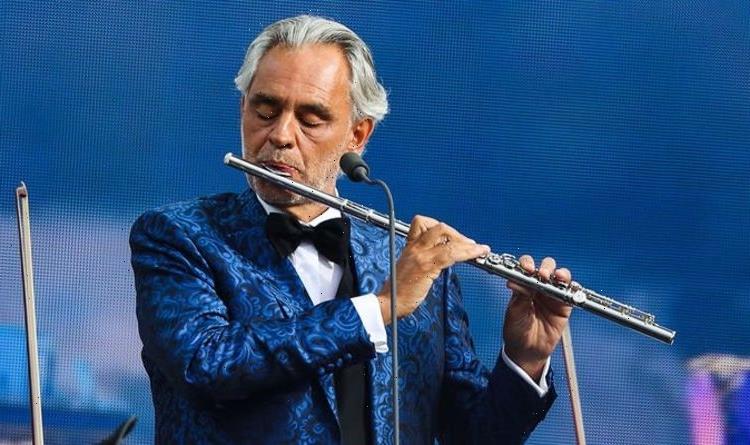 Backed by the New York Philharmonic, Andrea was one of the headliners at a major concert, WE LOVE NYC, to mark the end of NYC Homecoming, a nine-day series of events to celebrate the reopening of the city after the pandemic. The show took place last weekend in Central Park, with musical direction by Clive Davis, and was aired on CNN. As well as the Italian tenor, Oscar-winner Jennifer Hudson also wowed the crowd with a spectacular rendition of Nessum Dorma. SCROLL DOWN TO WATCH ANDREA BOCELLI SING AND PLAY THE FLUTE ON TWO SONGS

At the start of his set, Andrea took to the stage with his flute. Rather strangely, the conductor started up You’ll Never Walk Alone from the 1945 Rodgers and Hammerstein musical Carousel while the voice-over was still introducing the singer as “The best-loved tenor in the world whose mellow yet powerful timbre has resonated to the tune of 80 million records sold worldwide.”

The music already playing, Andrea started singing as the compere added: “A pop star but also a refined opera singer who is a living testimony of the Italian vocal tradition.”

And then all was forgotten as Andrea’s voice soared over the iconic melody.

On top of his spine-tingling vocals, the multi-talented musician, who also plays the piano, impressed the crowd with his flute playing on the musical bridge.

He also played the instrument at the start of his second number, the Neopolitan classic O Sole Mio.

The videos were recorded by a lucky concert-goer from his front row seat.

Later in the show, Earth Wind and Fire performed their classic September while Carlos Santana and Rob Thomas kept the groove going with their hit worldwide smash Smooth.

Unfortunately, terrible weather interrupted the rest of the evening and Barry Manilow was forced to abandon the stage halfway through his classic hit Can’t Smile Without You.

He kept his sense of humour, though, and later called in to Andrson Cooper’s show on CNN to talk about the experience.

Appropriately, the veteran entertainer then sang a snippet from another hit I Made It Through The Rain.

As well as the recent New York appearance, Andrea is busy with his ongoing US tour which resumes on October 13 in Milwaukee and continues through to the 19th of December.

A major European tour will then kick off in Prague on January 8. UK fans will have to wait until July 1 at Inverness, before the Italian tenor continues with nine more dates across the UK and Ireland in September and October, including two dates at London’s O2.