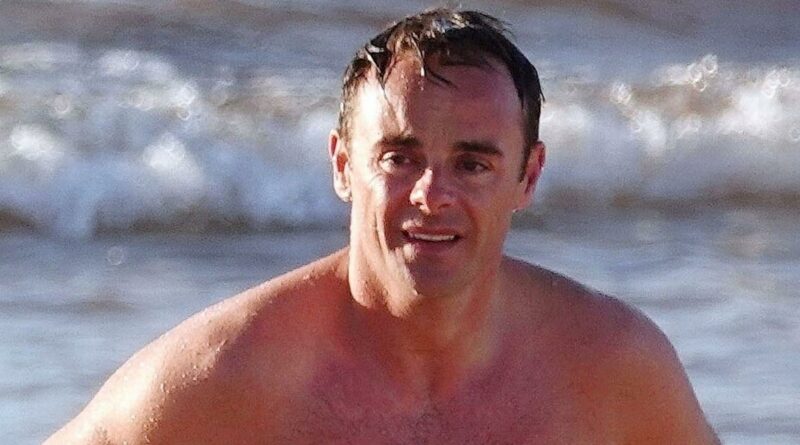 Ant McPartlin has revealed his latest inking while on his honeymoon in the Algarve, Portugal.

The ITV favourite is enjoying some time away to celebrate his marriage to his new wife Anne-Marie Corbett, after they tied the knot in a star-studded ceremony earlier this month.

The Geordie chap whipped his shirt off for some time at the beach, with snappers getting plenty of shots of his new tattoo.

The 45-year-old has had the outline of a love heart inked on the left side of his chest over his own heart, with a circle and a letter A inside of it – for Anne-Marie. Ant could be seen having fun in the water and playing some games with Anne-Marie and their friends as they enjoyed some downtime.

The I'm a Celebrity… Get Me Out of Here! host wore a pair of bright blue shorts that were covered in little images of swordfish.

Meanwhile, his gorgeous new wife Anne-Marie slipped into a teal string bikini as she soaked up the sun.

She pulled her blonde locks back away from her face in a low ponytail that was braided down the sides of her head, and threw on a pair of oversized black sunglasses too.

Anne-Marie, who has two daughters from a previous marriage, also covered up with a striped shirt when she played some games with Ant.

They could be seen batting a ball to each other as they kept active on their holiday. The duo are in Portugal with Anne-Marie's teenage daughters Poppy and Daisy – Ant's new step-daughters – on what they've dubbed their "familymoon".

They're also there with friends Jonathan Wilkes and his wife Nikki Wheeler.

Poppy and Daisy are Anne-Marie's girls from her marriage to ex-husband Scott Corbett.

They were a big part of Ant and their mum's wedding, as they acted as bridesmaids, but Ant also gave them a special mention. He reportedly said during his wedding speech: "I'm grateful they call me dad."

The stunning wedding took place in Hampshire, and a number of famous faces descended on the quiet village for the big event.

And it sounds like the reception was not to be missed – though some of the antics will never be revealed to the public, sadly.

David Walliams revealed that Ant and best man and best pal Declan Donnelly performed a special rendition of their track Get Ready to Rhumble.

But he'd been banned from sharing the video on social media, though he said: "It's one of the funniest things you have ever seen." Meanwhile, daytime host Christina Lampard was left with a hoarse voice after the "beautiful wedding" because she was "screaming over the music talking to everybody" and "singing as well".

The bridesmaids wore shades of lilac, while the flowers around the venue – St Michael's Church in Heckfield – were the same colour, as well as white and soft pinks.

Ant and Dec wore matching suits, with soft pink roses in their buttonholes.