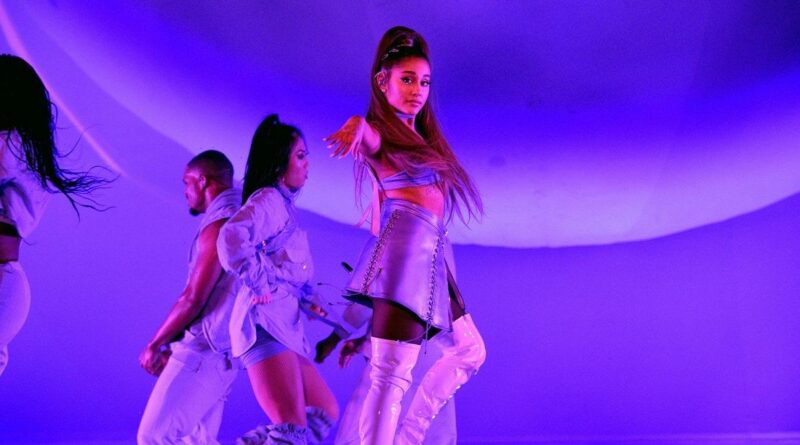 Happy birthday, Sweetener! Ariana Grande‘s fourth studio album turned 3 years old on Aug. 17. After the album’s release in 2018, Sweetener earned the pop star her very first Grammy Award: Best Pop Vocal Album. Later, she embarked on an international tour for the album, which turned into a concert film on Netflix titled Ariana Grande: Excuse Me, I Love You.

In celebration of the album’s birthday, let’s take a look back at its creation. Here are 3 facts about Sweetener, from the album’s meaning to Ariana Grande’s favorite songs.

When Grande began sharing promotional images for Sweetener, many fans noticed one key detail: everything was upside down. Everything from the album’s cover art to Grande’s Christmas tree in 2018 had the same effect during the Sweetener era.

Grande held a deep meaning behind the style. In response to a fan question about the upside-down nature of the album, the “Positions” singer said it reflected her feelings.

“I showed Aaron a photo, and he was sitting opposite me, and he said ‘i even love it upsidedown’ and that was kind of it for me,” Grande wrote. “At the time I had been feeling v ‘upsidedown’ for a while & the simplicity of that was like ‘oh duh wow my bestie a genius.’ everything clicked after that.”

Grande did not reveal what left her feeling “upside-down” at the time, but she has been vocal in the past about the trauma she experienced after a bomb killed 22 people during her concert in Manchester in 2017. She opened up about coping after the event in a 2018 interview with Time.

“Music is supposed to be the safest thing in the world. I think that’s why it’s still so heavy on my heart every single day,” Grande said. “I wish there was more that I could fix. You think with time it’ll become easier to talk about. Or you’ll make peace with it. But every day I wait for that peace to come and it’s still very painful.”

‘Sweetener’ is all about turning bad situations into something good

In the same vein, Grande chose the album name Sweetener for a meaningful reason. She explained to Time that the name expressed a message she wanted to leave her fans. When something bad happens in life, you can always find a way to make things better.

“When you’re handed a challenge, instead of sitting there and complaining about it, why not try to make something beautiful?” she said.

Grande revealed in the interview that she started taking care of herself again several months after the attack at her concert, and that care eventually led to a feeling of freedom and happiness.

“When I started to take care of myself more, then came balance, and freedom, and joy. It poured out into the music,” she said. “We’ve messed with the idea of not being able to find the ground again because I feel like I’m finally landing back on my feet now.”

Sweetener became such an important album for Grande that she found it hard to pick just one favorite track. So, she chose five. She revealed her top picks in response to a fan tweet.

Apparently, many fans felt the same way about the album, as Sweetener peaked at No. 1 on the Billboard 200 chart and remained on the chart for 89 weeks. In honor of the album’s birthday, fans should be sure to listen to Sweetener on Aug. 17.

How to get help: In the U.S. and Canada, text the Crisis Text Line at 741741 to reach a crisis counselor for support.