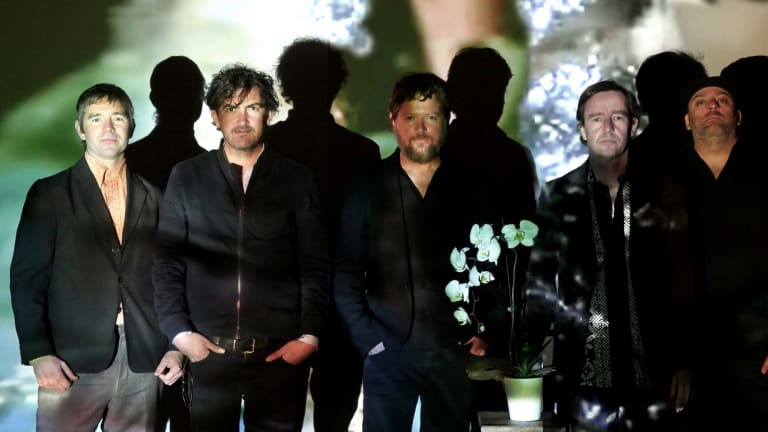 If you didn't know better, you might have mistaken it for an odd kind of family reunion.

The intimate gig upstairs at the corner pub drew a thicket of hipsters who looked vaguely related, and there was an easy familiarity between Augie March's notoriously deprecating frontman Glenn Richards and those yelling encouragement from the audience. So much so that when Richards got about 15 seconds into their best-known single One Crowded Hour in the wrong key, the mistake was met with guffaws. (Once it got going, it was gorgeous.)

Awkward mirth has long been part of Augie March's appeal. For all their literary leanings and haunting melancholia, you don't invoke Peter Costello, Kyle Sandilands and Caligula without a passing appreciation of the preposterous.

Early in the gig, offerings from new album Bootikins show they are as good at straddling the sublime and ridiculous as ever. Third Drink, a rumination on unwise choices, was lively to the point Richards complained drummer David Williams had introduced the "speed metal version", while I Hurtle Back to a Conservative Locker managed to be strangely wistful for a bluesy track invoking Nazis.

The newbies were not overdone, with each of the band's six albums represented, and neither were they outclassed. Men Who Follow Spring the Planet 'Round was written nearly two decades before When I Am Old, but they sat together in the set as if they always meant to be. Bitter Clingerzz, the new album's closer, was saved for the encore.

With a five-piece band, three touring musicians on brass and support act Ro returning to supply violin for two songs, it was one crowded stage. Occasional distortion showed the sounds was almost too big for the venue.

Quietly beautiful The Slant and the epic Definitive History, aka Pink Floyd by way of a suburban murder ballad, show why they defy easy categorisation – and why they will never be universally loved. Those who do admire them, and are in on the jokes, will no doubt be back for the next reunion.