Home » Music » Aussie rockers DMA's are slicker than they seem

DMA’s – a three-piece rock band from Sydney – are often compared to Britpop legends Oasis. Sure, there are some similarities (they make music in the same genre, for example), but to say DMA’s are a carbon copy of the Gallagher brothers and co, as many do, is a bit too simplistic. 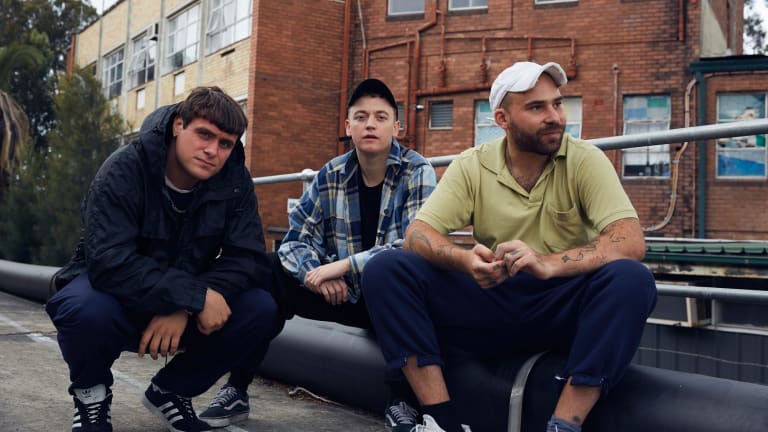 Take lead singer Tommy O’Dell’s voice. It still seems remarkable that such an unassuming-looking guy possesses such a delicate and comforting vocal gift. In his oversized shirts, caps and sneakers – that might be bought from stores exclusively stocking Ralph Lauren, Tommy Hilfiger and Nautica seconds – you’re forced to double take when matching up the sound he makes with what you expect, going on his exterior. Quite simply, he looks like a kid you might see spray painting a train.

But that voice is in sparkling form on Friday night at The Forum at the first of two sold-out Melbourne shows, part their national tour to promote their second album, For Now.

It reaches its full flight in the fifth song of the set, In The Air, and brings on a collective melting of shoulders and dissipating of tension in each person. It’s a beautiful, therapeutic sing-along.

That softer moment comes after a heavy opening quartet of tunes. The set started, unusually, with the wonderful Feels Like 37, from their 2014 self-titled EP. A nice first-up surprise.

Melbourne – sung in Melbourne to a rapturous response – is followed by Timeless, off their first album Hill’s End. Timeless is the band at their best. A three-piece in the studio, they swell to six when live, the drumming, backing vocals, bass, acoustic guitar, two electric guitars and O’Dell’s lead vocals melting into each other perfectly.

Their biggest hit, Delete, is predictably the high point of the set. For most of the song it’s just an acoustic guitar, O’Dell’s voice, a tiny bit of synth and the crowd all together.

Unfortunately the night ends without the soothing So We Know. It also ends without The End – a song from the latest album driven by a disco beat, completely different from anything they’ve ever done before. They also didn’t play their cover of Cher’s Believe which was one of the best Like A Version covers ever done on Triple J.