Home » Music » The band plays on for folk legend Bogle

Even now, as legendary folk singer-songwriter Eric Bogle makes his way down the East Coast on his latest tour he's still buttonholed by fans who think he retired nearly 10 years ago.

"People don't read things properly," says the 73-year-old. "I was never giving it away entirely. I never was and I never said I would." 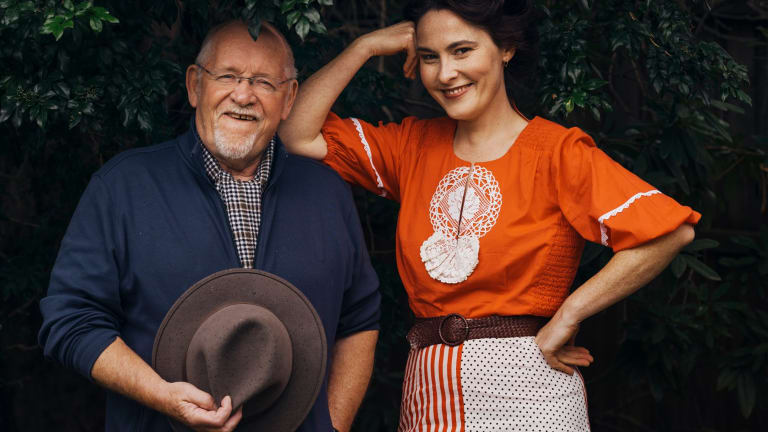 Folk legend Eric Bogle with Ami Williamson, who is accompanying him on his latest tour.

The misunderstanding goes back to 2009 and a massive tour of Britain and Canada he did with his long-time musical sidekick John Munro. After more than 90 dates the pair decided it was time to give away overseas touring.

But while he has given away the touring abroad, there have been countless appearances around Australia since then and two more albums.

However, the death last month of Munro, a fellow Scot, collaborator of 40 years and accomplished performer in his own right, has rocked Bogle.

"Now with John gone I'll re-assess it again," he says. "We'll see. At my age you've got to reconsider every coming year, anyway. You can make as many plans as you like and fate will decide otherwise."

So is this it then?

Is this tour – appropriately called Alive & Pickin' – the last chance to hear live the man who wrote And The Band Played Waltzing Matilda and No Man's Land (The Green Fields of France)?

"Let's put it this way," he says. "When politicians stop doing stupid things I'll stop f**king touring. The dickheads in charge of this country make me frightened."

He'll be around for a while then.

"Playing live is the ultimate experience for any musician," he says. "It's the biggest buzz there is. It keeps everything fresh.

"I've sung Band Plays Waltzing Matilda a million times. People say, 'How can you keep doing it?' I say because of people like you sitting and listening to me. You can hear the silence sometimes. It's so intense and they are hanging on every word. It's like singing it for the first time. They keep you going.

"I've never lost that sense of amazement and gratitude that people have paid money to hear me sing. I know what they want to hear and I'm quite happy to give it to them."

On this tour he is joined by powerhouse alt-folk singer-songwriter Ami Williamson and veteran musicians Emma Woolcock and Pete Titchener.

Bogle loves the sense of being among friends who know and love his music and it's lifted him substantially after the heavy loss of Munro.

"The only problem with my demographic is that they are f**king dying off. I'm hoping that's the reason rather than they hate my music."

He laughs as he says this. Audiences have in fact been good yet again.

And alongside Matilda and Green Fields, more people than ever are asking for another of Bogle's classics, Shelter.

Written in 1995, it was originally conceived as a simple expression of gratitude to Australia for providing a safe home for those in need.

But with lines To the homeless and the hungry, may we always open doors/May the restless and the weary find safe harbour on our shores, it has now acquired a new, sharper resonance.

"It never had political side to it when I wrote it," he says. "And now because of what's happened in Manus and other places it has a political edge to it."

He says he even recently considered rewriting part of the lyric to direct his anger more explicitly at Australia's refugee and detention policy but in the end decided against it.

"Part of the secret of songwriting is to leave the blank spaces for people's minds to fill in for themselves," he says.

Bogle has been railing against war and the stupidity of the political class his entire career and the fire in the belly seems to burn as bright as ever.

But can he remain positive about the future for the adopted country he loves so much?

"You've always got to be hopeful," he says. "You've always got to wake up in the morning and think today will be better than yesterday otherwise you'd stay in bed and die. I still have the hope that things will change but the faith it will has been eroded quite a lot."