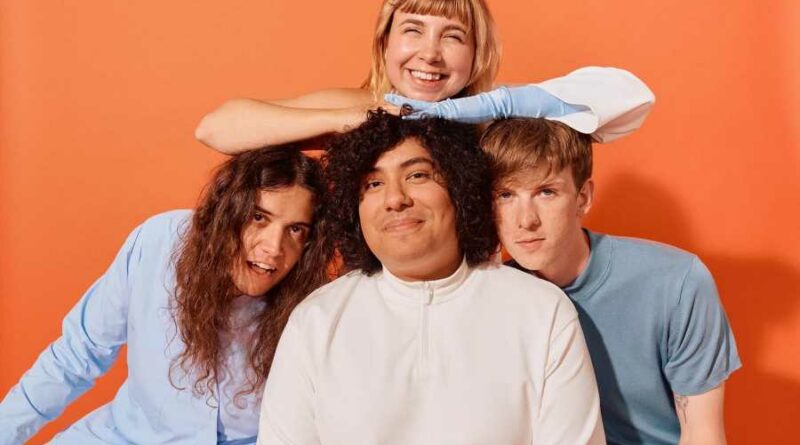 “‘Cause somebody’s gonna figure me out / It’s what I am, it’s what I was, It’s what I wanna become,” Beach Bunny’s Lili Trifilio sings with resignation on “Entropy,” the opener of the band’s striking sophomore album. The line has a double meaning: She yearns for the liberation that will come from no longer needing to hide a clandestine relationship, but it also underscores the bandleader’s confidence in knowing exactly what she wants. The song is the epitome of Trifilio’s growth as both a person and a songwriter—and representative of the power she’s found in embracing her emotions. And it’s what fuels Beach Bunny’s latest effort Emotional Creature.

For the past few years, the Chicago indie rockers have skyrocketed to fame in part as TikTok darlings —thanks to tracks like “Prom Queen” and also “Cloud 9” from their critically-acclaimed 2020 debut Honeymoon. For most artists, finding a large audience on the platform can be a mixed bag. It’s easy to be written off as another internet band because of “the algorithm,” but sometimes it’s the launching pad needed for hard-earned recognition. With Honeymoon, and now Emotional Creature, Beach Bunny has shown that they more than deserve to be taken seriously, but also that their cathartic connection to TikTok teens has been invaluable.

Trifilio’s overwhelming empathy has become a hallmark of her work, as she’s navigated teen trauma like longing, heartbreak, body image and ghosting through twee garage-pop anthems. And on Emotional Creature, she ascends beyond those themes with even more of an open-hearted approach, delivering plainspoken missives of quarter-like crises that include crippling anxiety, toxic relationships and self-discovery.

Emotional Creature is Nineties rom-com core at its finest. Barreling through the album’s 12 songs, it’s easy to envision Trifilio’s equally ebullient and wistful vocals soundtracking the ups and downs of romantic entanglements in everything from 10 Things I Hate About You to Never Been Kissed. It’s not surprising when you consider that Beach Bunny’s jangly power-pop anthems evoke the sweet but biting timbre of Letters to Cleo’s Kay Hanley—particularly when she’s cosplaying Josie from Josie and the Pussycats—as well as vulnerable contemporary bands like Charly Bliss and Camp Cope.

As a bird’s eye view of Trifilio’s heightened emotional states, Emotional Creature kicks off with all-consuming highs with the euphoric “Oxygen,” fueled by Trifilio’s soaring serotonin-boosted vocals. “Suddenly everything is easy/ I’ve never felt something so deeply/ ‘Cause with you, with you, I breathe again,” she exhales over raucous guitar fuzz. anthems like the bombastic “Fire Escape” and heart-fluttering “Karaoke” capture the intoxicating beginnings of a new relationship, detailing precious moments like carving your names into a subway seat and radio sing-a-longs on hometown drives. On the downtempo rock cut “Love Song,” a starry-eyed Trifilio is finally self-assured about her partner for what feels like the first time. “It’s funny how we move through space and time/Sometimes I think I’ve known you all my life,” she sings with a dreamy lilt.

Trifilio particularly shines on the heavier points of the record, such as “Eventually,” where she paints an unfiltered portrait of a panic attack. Those lows could be purely defeating, but she turns them into moments of resilience. On the sticky tune “Weeds,” there’s a newfound emotional maturity in the way Trifilio realizes how she deserves to be treated. “I’m tired of giving, giving, living like a lady in distress/But I don’t need someone to save me/Not your polly pocket in your lover’s locket/You can’t hold me down/I’m a bursting bottle rocket,” she asserts. Likewise, there’s a silent confidence in Trifilio’s apathetic attitude toward a difficult partner on the glittery pop-punk cut “Deadweight.” “You always get what you want/But I’m not someone who waits to feel love/Because I think I’ve waited enough,” she delivers like a kiss-off.

“Scream” is Emotional Creature’s Eighties synth-tinged centerpiece—and the standout of the record—where you can envision Trifilio fully letting go, driving in a convertible with the top down, the breeze gently blowing through her hair. “I feel confused by, what I’m ashamed for/I feel ashamed by, my human nature/Choose to adapt new outward behavior,” she declares, shaking off the shame of her feelings over a swirl of psychedelic guitar riffs.

It’s empowering to see Trifilio own the full spectrum of her emotions, and it’s what cements Beach Bunny’s latest record as a masterclass in confessional rock and roll.