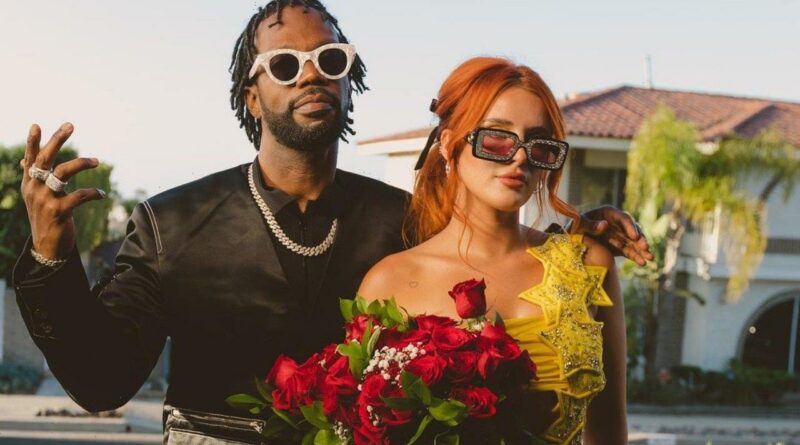 In the self-directed clip, the ‘Midnight Sun’ actress and the ‘Bandz a Make Her Dance’ rapper are romantically involved with the same woman, who later dumps both of them.

AceShowbiz –Bella Thorne gets borderline NSFW in new music video for her collaboration with Juicy J, “In You”. Dropped on midnight Friday, November 5, the clip follows the actress/singer and her collaborator who are romantically involved with the same woman.

In her scenes, the “Watch Me” songstress is seen making love with her girlfriend in bed and in what looks like a dimly-lit shower. Stripping down to lacy lingerie, she is seen simulating oral sex on the model who is lying in bed. In other scenes, the two ladies are caressing each other’s body while going topless.

Juicy, meanwhile, is mostly featured alone in his own bedroom. Some scenes, however, reveal that he is also with the same woman that Bella is dating. Bella is also seen getting frustrated when her girlfriend ignores her call.

Apparently not realizing they are two-timed by their girlfriend, the two artists end up coming to the girl’s house at the same time with gifts in their hands. “What are you doing here?” a puzzled Juicy asks Bella first, who responds with another question, “What are you doing?”

The girl opens the door only to take the gifts from both of them, and leaves them outside. As she returns inside, it is revealed that she already has a new girlfriend, dumping both Bella and Juicy.

On the song, Bella and Juicy talk about being abandoned by their love interest. “I miss you when I’m in you/ Tell me why we can’t continue/ No reply to the text I sent you/ No regard to the s**t we been thru,” he kicks off the song.

Bella then expresses her frustration as singing, “The nerve of you ignoring me when I’m making you a priority/ I’m a boss b***h, what you thought b***h/ You can talk slick but can’t afford me.” Later in their joint verse, they show the signs that the girl is playing with them as the lyrics go, “Do you really love me? Or is it nothing/ The only time you say you love me, is when we f**king.”

The new music video was directed by Bella herself, who has directed 2019’s film “Her & Him” as well as several music videos for her own songs and other artists’. There’s still no word on whether the song will be included in her upcoming album.