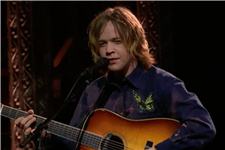 Billy Strings returned to late-night Monday evening, delivering a high-energy performance of “Know It All,” the lead track from the Grammy Award-winning artist’s 2021 album, Renewal, on The Late Show with Stephen Colbert.

Backed by his touring band, the 29-year-old singer displays his much-celebrated guitar chops as he details the period of reflection and regret often experienced after the end of a relationship. “Well I thought I knew it all/’Till I crashed into the wall,” he sings on the song’s chorus. “Let me learn from my mistakes/And try to pick up all the pieces.”

Strings is nominated for two Grammy Awards at this year’s ceremonies — Best Bluegrass Album for Renewal, which spent five weeks at the top of Billboard‘s Bluegrass Album chart, and Best American Roots Performance (“Love and Regret”)

2021 marked a major turning point for the guitar-playing phenom. Strings kicked off the year with a Grammy win for Best Bluegrass Album for his 2019 record, Home. In September, Strings was named Entertainer of the Year at the annual International Bluegrass Music Association awards, where he was also crowned Guitar Player of the Year for the second time in his career.

“Billy is bringing bluegrass to so many different kinds of people in such huge audiences,” Strings’ songwriting collaborator Jon Weisberger told Rolling Stone in an interview at the time. “And it’s a fresh approach in putting on a show.”

Strings will soon embark on a short U.S. tour, which includes a three-night run at Nashville’s historic Ryman Auditorium. He’s also slated to make his second appearance at The Peach Music Festival, which takes place June 30 through July 2 in Scranton, Pa.