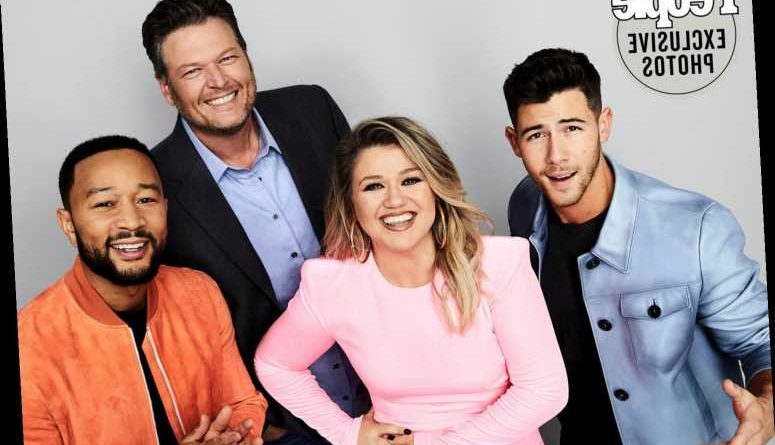 The world looked a lot different 10 years ago: Justin Bieber still had side-swept hair, planking was all the rage and The Voice was just kicking off its freshman season in the U.S.

While not all of the defining pop culture moments of 2011 — Bieber's haircut and planking included — were meant to last, The Voice was. And 10 years later, the hit NBC singing competition is stronger than ever as it heads into its 20th season (premiering March 1 at 8 p.m. EST).

"It's inconceivable," host and producer Carson Daly tells PEOPLE in this week's issue, on newsstands Friday, of how far The Voice has come. "We're very aware of how lucky we've been to be a part of this show. It's a dream job."

For Daly, 47, The Voice turned his life around 10 years ago.

"We started talking about the show in 2009, which was a pretty brutal year economically in the country," he says. "My [now-wife, Siri Pinter] was pregnant, I overextended myself on a house, and my late-night show was about to get taken off of NBC because of a feud between Jay Leno and Conan O'Brien. There was so much going on at the time. It was just a blessing to have the employment."

Watch the full episode of People Features: The Voice Turns 10 on PeopleTV.com or on the PeopleTV app.

Blake Shelton was in a similar position when he joined the coaches' panel with Adam Levine, Christina Aguilera and CeeLo Green that very first season.

"When I started the show, I had been making records for 10 years with some success and some pitfalls," he says. "There were times where it was like, 'Man, is my label gonna drop me?' Then we'd have another okay hit on country radio. I was just hanging in there. The one thing I think attracted the producers to me was the fact that people knew me as a smart-ass, but in a fun way."

Shelton, 44, initially thought though that the show would be a flop.

"To be honest, I didn't think the show was gonna last," he says. "In fact one of the first conversations I ever had with Adam was, 'Man, how stupid is this?'"

Shelton's mind changed about a month later, when executive producer Audrey Morrissey pulled him aside and asked him, "Did you know this show's a hit?'"

"I went, 'Well, everybody I know watches it, but they just can't believe I'm on TV,'" Shelton recalls. "This was before you could see all this instant information on your phone, and you just had to go off what people were saying." The Voice was indeed a smash hit from the start, with its focus on pure vocal talent rather than contestant antics — plus the appealing, over-the-top personalities of its coaches — drawing 14.4 million viewers in its first season.

Ten years later, the show has welcomed 14 A-list coaches, crowned 19 winners and, with 110 million viewers across all platforms a year, become the most-watched TV show of the past decade. In the upcoming season, Shelton — who met his fiancée Gwen Stefani on The Voice set in 2014 — and Daly are back once again, as are returning coaches Kelly Clarkson, John Legend and Nick Jonas, whose lives have also been changed by the show.

In the years since Clarkson, 38, first joined The Voice in 2018, she earned her own daytime talk show on NBC.

"After saying no to it three times, I'm so glad I finally said yes," she says. "It feels like a grown-up job where I have a chance to do something that can leave an impact. I love singing, I love writing and I'm working on my next record right now. But I have never felt more useful than I have with this talk show because I get to be the vessel for so many cool people. It sounds like a really Girl Scout answer, but it is true."

"I keep telling John and [his wife] Chrissy Teigen to do a show, but then I'm like, 'Wait, don't do it in my slot!'" she adds. "Everyone would watch theirs!" Legend, 42, might not have his own show yet, but he did earn PEOPLE's Sexiest Man Alive title in 2019. He followed in the footsteps of Levine and Shelton, who were crowned in 2013 and 2017, respectively.

"I sat next to Blake long enough that his sexiness rubbed off on me," Legend jokes. "I learned all of his ways."

Since joining the show, Legend has loved getting a chance to return to his roots.

"I love advising these artists," he says. "It's something I've loved doing since I was young. I was a choir director when I was a kid, and I always enjoyed working with other singers. I get so much pleasure from seeing them be their best."

Back as a coach after a season off is Jonas, 28, who first joined the show in February of last year, right before the COVID-19 pandemic turned everything on its head.

"When I joined the show in season 18, that was the first time we did the live shows from home," he says. "Being on-set this season is really nice. I've definitely loved getting to know all these guys."

Throughout the years, all of the coaches have developed a tight bond.

"People ask me a lot, 'Are the coaches really like how they are on air? Do they get along that well?' And I say, 'Well, yeah,'" says Daly. "It's pretty organic. We have a talent compound where all of our trailers are, and we all bring our families and pets and celebrate each other's birthdays."

"I remember when Shakira was a coach, I was so excited because she had her team build a playpen in our talent area for her kids that we all got to use," he continues. "So it's a very family-friendly environment backstage with all of us. Our kids have all grown up together."

Adds Legend: "We get along better off-camera because we don't have to be rivals. We can just enjoy each other and make each other laugh. We have a good time with the other coaches!"

For all the details on The Voice's 10-year anniversary and new season, pick up the latest issue of PEOPLE, on newsstands everywhere Friday.