Home » Music » Brian May DOUBTED Freddie Mercury was right for Queen ‘He was out of control, screaming’

Freddie Mercury is regarded as one of the greatest vocalists and showmen in the history of popular music. His delivery of Bohemian Rhapsody at Live Aid will forever be regarded as oen of the all-time finest performances ever recorded. Yet, in the early days both Brian May and Roger Taylor had serious doubts about his abilities, especially his singing.

In a new interview with Queen and Adam Lambert, Freddie’s bandmates talk honestly and affectionately about their first impressions of him.

May said: “In the beginning we liked Freddie, but we weren’t convinced he could do it. He would dash around and scream his head off and seemed completely out of control.”

Taylor had previously said he first saw Freddie when he was front alt-rock group Ibex, he thought “Good on showmanship, not sure about the singing.” Taylor later described him as sounding like a “powerful bleating sheep.”

In the new interview May admits he was jealous of how other “more professional” acts were already enjoying much greater success than Queen. 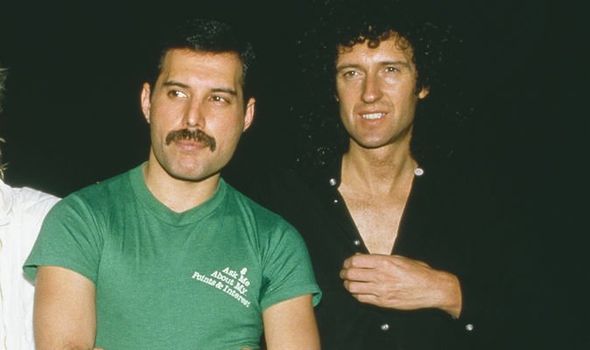 May added: “We had seen how professional Led Zepellin were.

“I saw David Bowie at (iconic venue) the Rainbow and felt jealous because he had made it and where the hell were we?

Doing gigs at imperial College, making popcorn for the audience and inviting executives from record companies who never came.”

HOW IS BORIS JOHNSON HANDLING THE CORONAVIRUS? VOTE IN OUR POLL

At that time, Freddie and Roger also had a second-hand clothes stall at Kensington Market.

Roger says: “We were surrounded by the most colourful people oin London. Jimi Hendrix turnedup once but we had nipped out for lunch.”

This would have devastated Freddie, who idolised the star, used to follow him around the country to watch his shows and had his photograph pinned up in his room for inspiration.”

Roger also revealed Freddie’s camp nickname for them at the time.

Roger said; “We gravitated there because we flounced around in velvet and were generally flashy. Freddie called us the Kensington Ponces.”

While Roger and Brian may have had their doubts and frustrations with the band’s lack of early success, Freddie did not.

Roger added: ‘He never doubted that we would make it. He used to say, ‘Talent will out, my dears.'”