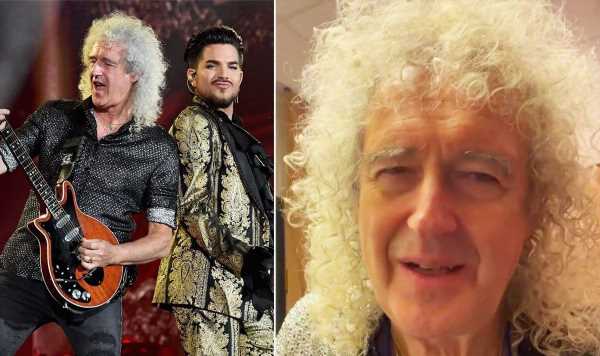 Queen + Adam Lambert resumed their interrupted world tour last night in Northern Ireland. The early reviews are ecstatic and May posted an immediate message to the fans saying: “Thanks for such a magnificent welcome tonight, dear people of Belfast. It was incredible to feel so much love.” However, ahead of tonight’s second show he also admitted they were all feeling a little “battle-scarred” but determined to shake it off and take even more risks.

In a video message on Instagram, Brian said: “All set to be even more risky than last night because we changed a few things. We’re all a bit battle-scarred from last night I think, but it makes you try harder. Cannot wait! See you all there and let’s rock!”

The original line-up of Queen were always known for being absolute perfectionists, especially when it came to live shows,  carefully crafting every aspect. Their astounding show-stealing slot at Live Aid was the ultimate proof. However, the icon also posted a fascinating new message from Belfast revealing a powerful new belief.

Brian wrote: “The thrill of anticipation here backstage is palpable – you can feel it in the air – half fear, half joy in every department. But underneath it all there is a great warm confidence that it will happen.

“This whole touring QAL (Queen + Adam Lambert) team is full of passion and the pursuit of excellence, beyond what could be expected. Gotta say this ‘family’ is probably the best and most skilled touring team EVER. And that is saying something.

“So I have the firm belief that everything tonight is how it is meant to be. It will not be “perfect”.”

Brian went on to beautifully and eloquently explain this philosophy: “That’s not what a rock show is about. It’s about treading a line between what is firmly achievable and what is risky but worth reaching for.

“We’re one of the very few bands out there now who actually play LIVE, without backing tapes or clicks. So what you’re hearing is REAL – and tonight, all the work and care that has gone into preparing this feast will carry us through.

“On a good night it can be perfectly imperfect. And so … once more into the breach, dear friends …. What an emotional moment after the last 2 years’ torment we have all been through.”

After Belfast, Queen + Adam Lambert move on to Manchester’s AO Arena on May 30 and 31, followed by Glasgow’s OVO Hydro from June 2-3.