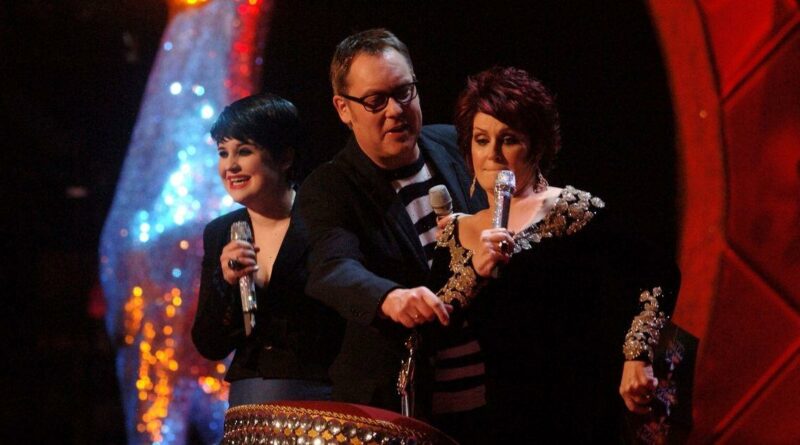 The BRIT Awards haven't just graced us with the biggest artists on the planet, they've also given us some of the most fiery celeb bust-ups in history.

Hosted by ITV, the iconic award show is back in business after rescheduling to May due to Covid-19, and you can get ready to see mega-stars such as Ariana Grande take to our screens alongside the likes of Harry Styles, Dua Lipa, and Billie Eilish.

But over the years, the BRITS and their international superstar nominees have birthed some classic moments that we haven't stopped speaking about.

But the famous award show has given rise to some of the most notorious celeb bust-ups in modern showbiz times, so The Daily Star have taken a trip down memory lane by remembering some of the show's biggest spats.

Peter Kay was far from pleased with Oasis frontman Liam Gallagher back in 2010, after the rocker threw his microphone on the floor after accepting his award.

When Liam Gallagher went up to collect the Best British Album Of The Past 30 years award, and he earned his place in one of the show's most infamous moments that will – in the words of Oasis – 'Live Forever'.

After Liam thanked everyone apart from his brother Noel, who left the band before they split in 2009, Liam proceeded to throw the BRIT Award into the crowd.

He threw the mic on the floor and stormed off stage, leaving Brian May from Queen standing on his own.

But host comedian Peter Kay was not impressed and returned to the stage shaking his head, saying "What a kn**head".

Geri Halliwell Vs The Spice Girls (2000)

Back in 1997, Geri Halliwell made BRITS history when she wore a Union Jack mini dress – designed by her and Gucci – to the event with Spice Girls which truly won the nation's hearts.

But Geri Halliwell had previously left the Spice Girls back in 1998, and tensions seemed to culminate at BRITS 2000.

So when Halliwell, or Ginger Spice, refused to join her former bandmates on stage to collect the Outstanding Achievement award, the audience erupted in boos at Earls Court.

The singer had chosen to perform her solo single Bag It Up, which came out the next day, while Spice Girls closed the ceremony without her, singing a medley of hits as a four piece.

When comedian Vic Reeves appeared to stumble over his words and forget what award he was presenting, Sharon Osbourne was fuming.

Host Sharon, who believed the funnyman was drunk, took matters into her own hands and pushed Reeves away, calling him a "p*ssed b*****d".

She then finished the task of presenting the award herself.

Reeves, however, said he wasn't drunk and had looked confused during his presenting job due to an autocue malfunction.

Robbie Williams decided to take his BRIT award win in 2000 and use it as an opportunity to call out Liam Gallagher for a fight.

Once friends, Robbie and Oasis fell out in the late 90s and started regularly hurling insults at each other in the press.

When the Rock DJ singer won Best Single, he took to the stage and said "Would anyone like to see me fight Liam?".

"Would you pay to come and see it?

Liam, who wasn't in the country when Robbie made the comment, didn't forget the tense call-out and fired back at the Q Awards the same year.

At the award show, Liam jibed: "This one is for Robbie, as usual.

He understands the letter Q."

When asked if he thought he drove Rob out, Liam replied: "No. I reckon he drove himself out, mate."

In 1996, the King of Pop Michael Jackson was performing his world-pleading track live on the BRIT Awards stage.

The dramatic performance saw MJ coated in a white light in front of an emotive video montage which saw the world and nature being destroyed.

However, this song was soon to be disrupted by an unlikely musical guest.

As Michael belted out the track to the world, with an array of dancers behind him in the role of poverty-stricken people, Jarvis Cocker waltzed onto the stage and lifted up his top.

The cameras then focused on the Pulp singer, and an army of show security burst onto the scene pushing Jarvis out of view.

The whole time, Michael seemed unaware of the sudden entry onto his stage.

Britpop titans, Oasis and Blur arguably had one of the most famous musical rivalries in British music history in the 1990s.

During this time, the two mega-bands were constantly in competition for awards, and sometimes it led to some heated moments.

At the 1995 BRIT Awards, Blur and Oasis were both up for the Best Group award.

After both bands had taken verbal swings at each other before the ceremony, Blur eventually took home the gold, winning the award.

However, Blur frontman Damon Albarn actually paid tribute to the high quality of British music and Oasis rather than use to the opportunity to slag off their award show rivals.

He even commented: "It's not us on our own. I think we were the first people to shout about it. But bands like Oasis…I think it should have been a joint with for Best Group."

But Oasis didn't let the reported feud end there, because when they collected three awards at the BRITs in 1996, they took a stab at Blur on stage.

Appearing on stage to pick up the price for Best Album, Noel and Liam both sang an interesting rendition of Blur's hit song 'Parklife', much to the excitement of the audience.

The BRIT Awards will air on 11 May and is taking place at the O2 Arena in London.