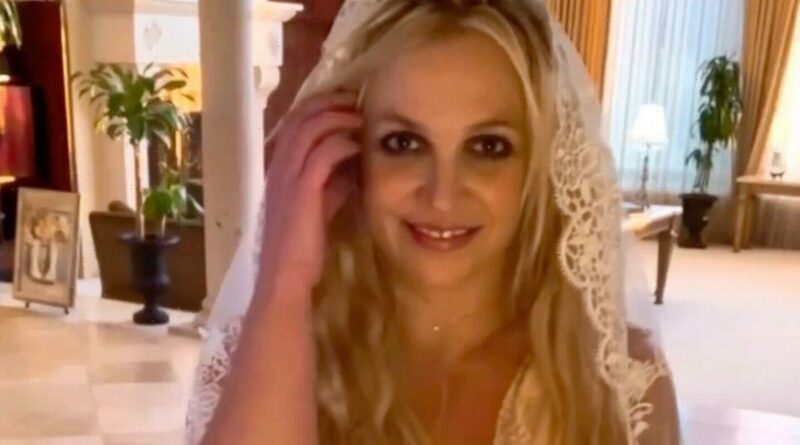 Britney Spears fans have shared their concern for the pop princess yet again after her latest clip on Instagram.

The pop princess has been sparking concern with her latest posts on the social media site, but as she dressed up in a slinky dress and added a veil to the mix, fans couldn't help but question if she was okay.

Britney was filmed looking in the camera as she pulled on her hair and donned two separate satin dresses as she combined the clips.

One snippet saw Britney in a satin gold dress while the second had a lace top with a satin bottom.

Britney added a veil to her long blonde locks as she had dark eye makeup surrounding her eyes as she stared at the camera and wrote a caption haling herself an "angel".

She said: "I never wear my gowns… they are so beautiful. This is my great great grandmother's veil. I'm such an angel!"

While Britney's post prompted a lot of fans to fawn over the star and tell her she "is an angel" while she hit over 100,000 likes, others couldn't help but express their concern.

One person wrote: "I am trying so hard not to presume, but her account is so obviously not run by Britney!", before adding: "Wake up world! Something is VERY WRONG! She is not free!!! It is beyond obvious!"

Another wrote: "This isn’t her posting at all. This s**t is becoming disturbing actually."

Meanwhile others said they "can't watch" Britney's Instagram posts anymore as concern for the star continues to rise.

Her latest clip comes shortly after Britney shared a video in the same outfit where she appeared to be crying as mascara streamed down her face.

Again fans shared their concern for the hitmaker after the tear marks had multiple fans asking if she was alright and begging her loved ones to support her.

Britney's followers have been calling for the pop princess' loved ones to check in on her and make sure that she's okay.

Fans continue to rally behind Britney following the star being freed from her conservatorship just last year.