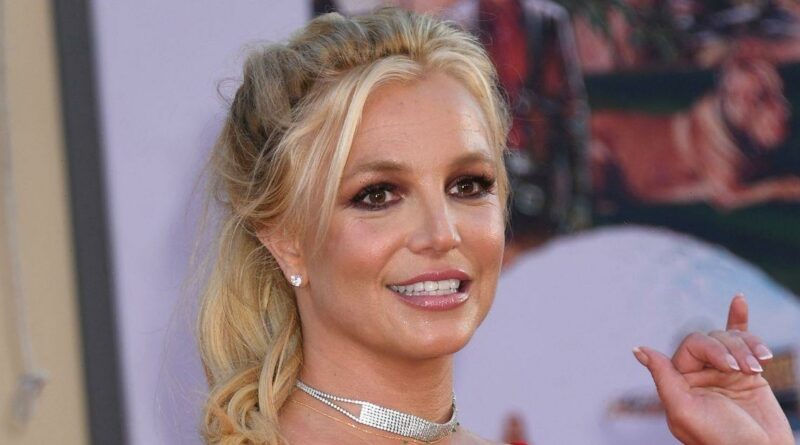 The pregnant singer, 40, can be seen cupping her breasts and hiding her privates with a pink heart emoji as she poses in front of a tropical garden.

Fans got a full view of her intimate tattoos that sit below her bikini line as she shoots a half-smile to the camera.

The star can be seen wearing thick black eye make-up with her trademark blonde hair pulled back into a messy bun.

She captioned the post: “Photo dump of the last time I was in Mexico BEFORE there was a baby inside me … why the heck do I look 10 years younger on vacation???”

The “photo dump” shows a series of six pictures, all exactly the same, but with different filters and slightly altered zooms.

Some fans complimented the star on her great physique, but many expressed concern for the star, claiming the pictures are a “cry for help.”

“This girl she is sick, she is crying for help,” said one fan.

A second mused: “Starting to think those who were in control perhaps should have stayed in control …”

Another expressed concern about her sons Sean Preston and Jayden, seeing her pictures: “At least make a only fans page. I love Britney but she got two big boys who can see this.”

While a fourth urged: “I really wished you would stop doing this. You keep proving that bit of an odd instability exists.”

The star announced that she is expecting her first child with fiancé Sam Asghari back in April, just month after she was freed from her conservatorship.

She posted more naked pictures earlier this month in which she can be seen smiling with her Australian shepherd pup Sawyer strategically placed over her front.

Earlier this year, Spears called Asghari her “husband” on Instagram, leading fans to speculate that the pair got married in secret.

Fitness instructor Sam appeared to confirm the pair are not yet married, as he discussed their future wedding date on social media.

The 28-year-old man wished his fiancé a “Happy Mother’s Day” while revealing that their future wedding date “has been set”.

“Our lives has [sic] been a real-life fairy tale,” he wrote on Instagram. “Happy Mother’s Day to my soon-to-be queen.

“Also the big day has been set,” he added, revealing that “nobody will know until the day after.”