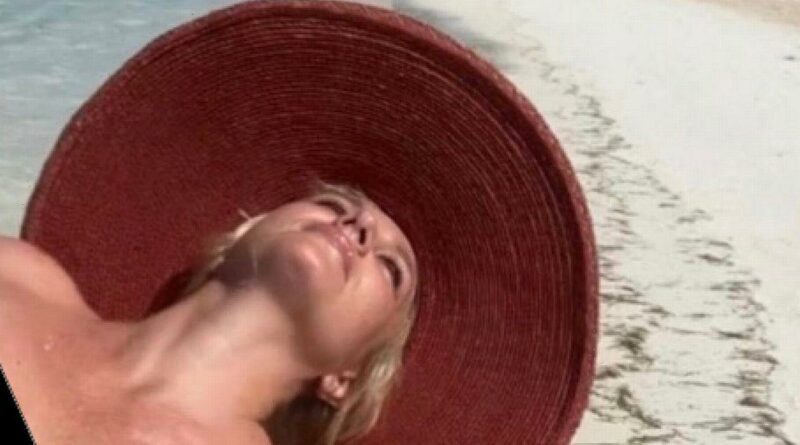 Britney Spears has sparked concern from her fans after sharing another topless photo to her Instagram profile.

The pop princess has been concerning her fans for quite some time with her snaps, but her latest influx of posts has left fans begging for her to show them a sign.

There has been a mixture of fans asking for her to go on an Instagram live to prove she's the one behind her posts and a recent request has prompted one person ask her to "blink" if she's okay.

The 41-year-old singer took to Instagram to share a picture of her lying topless on a beach with emojis covering herself up to avoid a ban from Instagram.

As Britney threw her head back with an oversized hat placed on her head and held her hands over her boobs, she wrote: "Come on sexy girls mom… take the mic. Match up movie star and my hubby. Talk s**t over my head… what's up my friends."

While she was inundated with likes on the photo, many took to her comments to share their concern for her.

One user wrote: "This is legit turning into an episode of Black Mirror," while another said: "Britney blink if you're ok."

Another said: "That is like a bot comment on the caption," while a fourth added: "When are you all gonna wake up and see why are being played hardcore?… #Whereisbritney."

Concerned fans also said that Britney would be "mortified" if she was aware the snaps were getting posted, adding: "Britney is NOT posting this."

Her topless snap came shortly after she shared a post about her sister Jamie Lynn Spears as she said she was thinking about her on her birthday.

Britney congratulated her sister on "being o brave, inspiring and showing guts and glory", before adding: "I love you!"

Fans were left even more confused claiming the post was a "big mystery" because the pair fell out months prior and were yet to reconcile.

Some were adamant that the post made them "know for a fact" that she's not running her own account, with many saying they refuse to believe it until she does a live video as "proof".