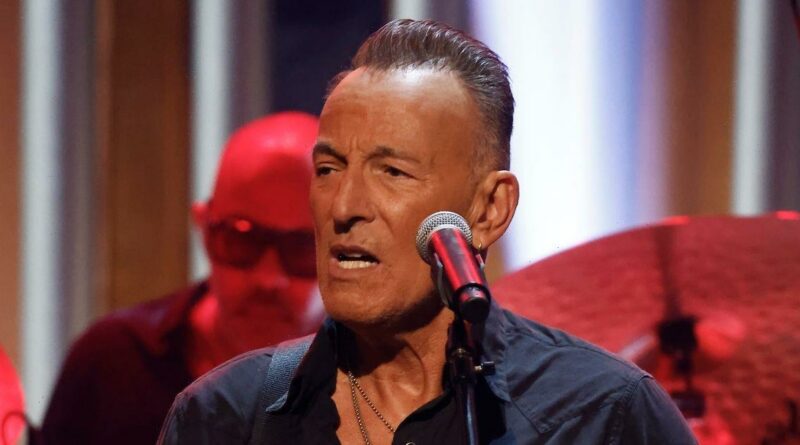 Rockstar Bruce Springsteen has shocked fans with an unrecognisable photo posted to Twitter with an admirer.

The Born In The USA singer had traded his signature black shirt for a grey v-neck and pair of glasses.

The 72-year-old was mistaken by fans for film director Woody Allen in the grey jumper and a pair of black specs.

One fan joked on Twitter: "In case you still refuse to feel old – Bruce Springsteen now looks like Woody Allen."

Another tweaked one of the lines from his 1975 hit Born To Run, posting: "Gramps like us / Baby we were born to nap!"

A third was confused, referring to the blue/gold dress optical illusion: "The photo of Bruce Springsteen looking like Woody Allen is the craziest thing I've seen on Twitter since the dress."

Born To Run and Dancing In The Dark musician Bruce, known as "the boss", has a career spanning almost five decades and is known for his legendary concerts with the E-Street Band.

One of Springsteen's E-Street band members is also his wife, musician Patti Scialfa. They married in 1991 and have three children together.

One of their children, Jessica, is an equestrian who competed at the 2021 Tokyo Olympic Games.

The new photo is thought to have been taken in Brussels where Bruce was visiting his daughter who was taking part in an equestrian competition.

The singer wasn't performing and was just visiting Brussels for a quick break as his tour with the E-Street Band will not be kicking off until February next year.

Bruce will also play four huge dates next year, including Murrayfield Stadium in Edinburgh and Villa Park in Birmingham.

Springsteen has inspired musicians through the decades including Jon Bon Jovi and The Killers, who he recently collaborated with on the song Dustland in 2021.

Many people know Bruce for his anthem Born In The USA, from his 1984 album of the same name.

The album included hit single Dancing In The Dark, which featured a pre-Friends Courteney Cox dancing onstage with the singer in the music video for the song.

Along with albums including 1978's Darkness on the edge of town, 1992's Human Touch and 2019's Western Stars, Springsteen's five decade career has also seen the musician write songs including Streets Of Philadelphia, for the 1993 movie Philadelphia, starring Tom Hanks.