In an era in which popularity is measured in vast numbers of streams, clicks and likes, there is still something symbolic about having a No 1 record. That's what Busby Marou achieved, last year, when their third album, Postcards from the Shell House, debuted on top of the ARIA chart.

"It's absolutely massive," says Tom Busby, one half of the acoustic duo with Jeremy Marou. "The phone call we got from the record company, they were so happy and proud. They've been working so hard for so long, even back when they weren't making a cent. Now, no matter what happens, they can never take that No 1 away from us." 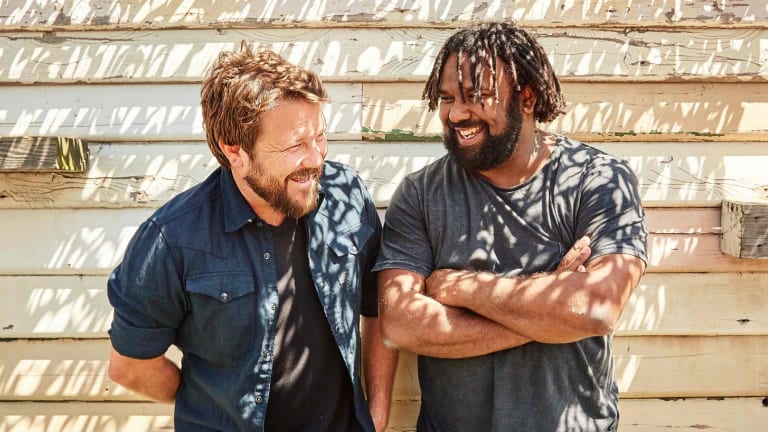 Busby Marou’s third album, Postcards from the Shell House, has a “nostalgic holiday feel”, in both sentiment and sound.

Only last month Busby Marou's song Best Part of Me won the Australasian Performing Right Association (APRA) award for best blues and roots work of the year. The recognition across the industry is testament to the pair's hard work and passion for making music.

The new album was recorded in Gisborne, Victoria, and on Great Keppel Island. The latter location is Busby Marou's spiritual home; the place where they wrote most of the album's songs and "tested them out around fires, having a beer with friends" and with other people they had previously never met.

The duo were born and raised in Rockhampton, where Busby was the youngest of eight kids. Summers were often spent on Keppel at a big beach house. "Everyone would drag their mattresses out onto the verandas, all my brothers and sisters and cousins, and sleep under the stars," Busby fondly recalls. "We'd wake up when the sun hit your face, then jump over the verandah, down to the beach and swim until the sun would go down … then do it all over again. They're awesome memories that never leave you. And it's music, for me, that triggers those memories."

The songs on Postcards from the Shell House are, in turn, about "memories from way back … about islands, about a bit of love found or lost on the beaches". The "nostalgic holiday feel" carries in both sentiment and sound with the record finding Busby Marou returning to their acoustic roots.

After 2013's Farewell Fitzroy debuted in the top five, their set-up grew, incorporating a backing band and more lights. "It was becoming a bit more rock'n'roll," Busby admits says. So, they returned to duo mode and their fans embraced the earlier feel. The stripped-down setting showcased their sweet harmonies, in which Busby hears Marou's Torres Strait Islander heritage.

"We embrace that culture," Busby says. "My favourite part of Busby Marou is hearing his harmonies in with mine … when he opens his mouth, you close your eyes … the sound of his voice has those island vibes. That's where he comes from, he's a Torres Strait Islander. And we're both very proud of that."