Home » Music » Camille O’Sullivan review: When the band turns down, Camille turns up the heat 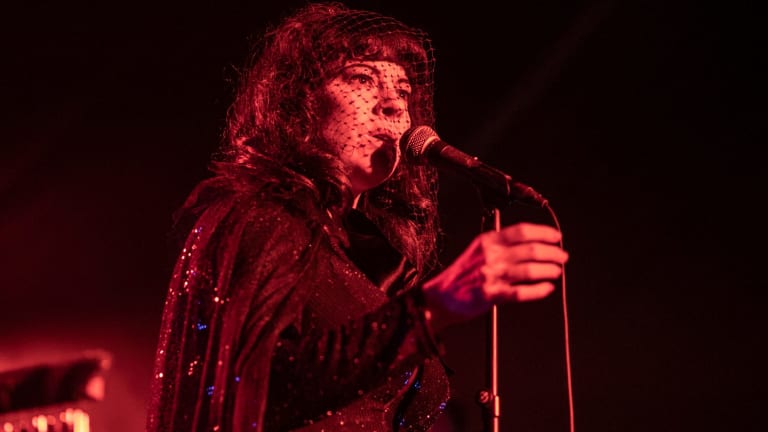 Dear God, when she's good, she's so very good. You hear it in the way she can snip a consonant as precisely as a practiced circumciser might something else; even more in the way she can let a final consonant crumble to nothing more than breath, like a fine saxophonist will do, and yet, despite the absence of sound, she still leaves the air molecules between you and air pulsing with emotion.

Were all that Camille​ O'Sullivan​ did that good, five stars would be twinkling atop this review. Instead she opted to shrug aside that lame, tame (not that she was ever meek!) cabaret tag, and rock out a little; to remember David Bowie three years after his death with some searing, shrieking renditions of his songs. But, as good as the songs are – Blackstar​, All the Young Dudes, Five Years – O'Sullivan​ ceased to play to her strengths. Instead she was playing at being a rock goddess as if it were a private fantasy. She is such an intriguing, eccentric performer that anything she does is of interest, but other material better exploits her unique strengths as a singer.

You heard this instantly when she was just accompanied by Feargal​ Murray's piano on Declan​ O'Rourke's​ Galileo, and suddenly it seemed she were whispering desperate truths in your ear, alone, amidst this sold-out crowd. You heard it in the Tiger Lillies' Crack of Doom, in the scalding hurt of Jacques Brel's​ Marieke​ (sung a capella), and in the tempest of darkness and contempt that is Leonard Cohen's The Future (which she then bandaged with the glinting hope of his Ring the Bells).

She brought unfeigned tears and intensity to Nick Cave's unfathomably​ sensuous The Ship Song, and improbably left us with Billy Joel's Lullabye​ (Goodnight, My Angel). Suddenly the blood and thunder of Paul Byrne's drums and Steven Fraser's monstrous guitar (seemingly turned up to 11) were a musical world away, and O'Sullivan​ was allowed to caress words in the feline way that only she can.