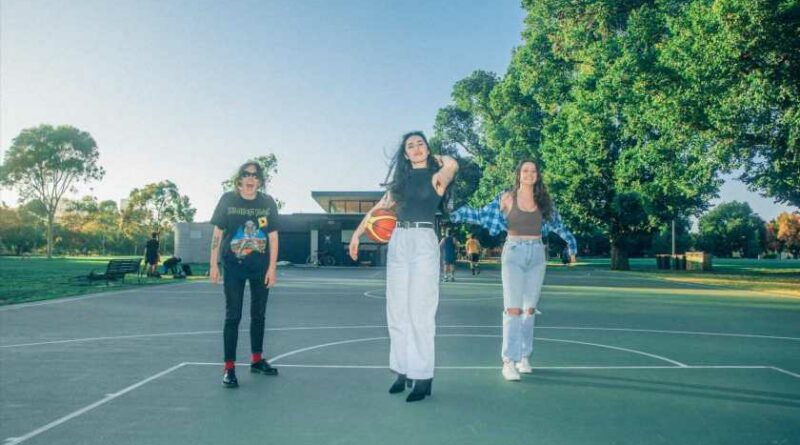 Six years after ascending beyond Victoria, Australia’s Footscray Station scene and releasing their fearless, eponymous debut, Camp Cope members Georgia Maq, Kelly-Dawn Hellmrich, and Sarah “Thomo” Thompson are watching the world give them the long-overdue respect they deserve. A week before I met with the Melbourne rock trio over Zoom, they released their second collaboration with local radio station Triple J. It fared much better among audiences, especially on social media, than their previous effort in late 2016; YouTube viewers, often men, rushed to the comments to disavow the then relatively new band’s performance and artistry.

“It was our first year of being a band and people were so brutal,” Hellmrich says on our video call. “I feel like, if we were boys and were a punk band and just had a couple of chords and were rocking out, it would have been like, ‘Wow, this is so cool.’” Instead, the band was met with critiques about their unabashed playing style and their appearances, including direct jabs at Hellmrich’s bass skills and Maq’s facial hair. “We were just young and starting out. It felt like people were much more critical of us,” Hellmrich adds.

But in 2022, Camp Cope’s triumphant return to Triple J’s studio, to celebrate their third LP Running With the Hurricane, offers up much-celebrated live renditions of both the electric title track and Sam Fender’s “Seventeen Going Under.” Fender’s version went viral on TikTok last year, with users using the lines “I was far too scared to hit him / But I would hit him in a heartbeat now” to disclose their experiences with acts of gendered violence. That resonated with Maq and company, as they elected to change the lyrics of Fender’s song by transforming it from a story of a boy growing up in the United Kingdom to that of a woman growing up in Australia. The revision was met with praise from fans and beyond, with listeners championing the band’s musicianship, signaling just how much has changed.

When COVID-19 lockdowns reached Australia in 2020, Running With the Hurricane was mostly written and the band was gearing up to return to the United States to record the LP in Philadelphia. After spending the first portion of the pandemic at home, Maq decided to return to nursing, and spent months on the front lines of vaccine administration, while Hellmrich moved home to West Sydney. But the band is familial, and not even the restrictions of isolation could hurt their chemistry.

“The group chat is constant every day, all day,” Hellmrich says. “We don’t ever not talk. It’s really cheesy to say, but it is like we’re sisters. We’re all so different and individual like that of siblings, but we’re so close. I’ve never met a band that has the same relationship dynamic we do.”

The band gets labeled political because they are an all-girl group singing, sometimes loudly, about the injustices happening in their home country. On 2016’s “Flesh & Electricity,” Maq addressed her experiences in the nursing workforce; “Jet Fuel Can’t Melt Steel Beams,” offered a critique of patriotism and gun violence. Every song came with a definitive three-piece sound, where Thompson’s drums perfectly ran in tandem with Hellmrich’s bass, and Maq’s sublime guitar work complimented her own vocals just right. They replaced harmonies with growling, singular declarations. But a new album called for a different approach. “[On Hurricane] I wanted dynamics, because [2018’s How to Socialize & Make Friends] was very cut and dry,” Maq says. “It was like, ‘We have bass, drums, guitar, yelling woman, and that’s what the album was.’ I didn’t want to be that anymore.”

The music industry now holds itself more accountable than it used to, as well, and Running With the Hurricane is a good representation of that progress. The songs balance jubilant themes with a constant reminder of the work that’s yet to be done, which pairs with live music’s more diverse lineup cards and how the platforms of marginalized artists have never been stronger. “It’s scary to fuck up,” Maq says. “It’s scary to admit that you fucked up, and we should be doing that more, because fucking up isn’t the end of the world. There’s room for change and there’s room for forgiveness.” 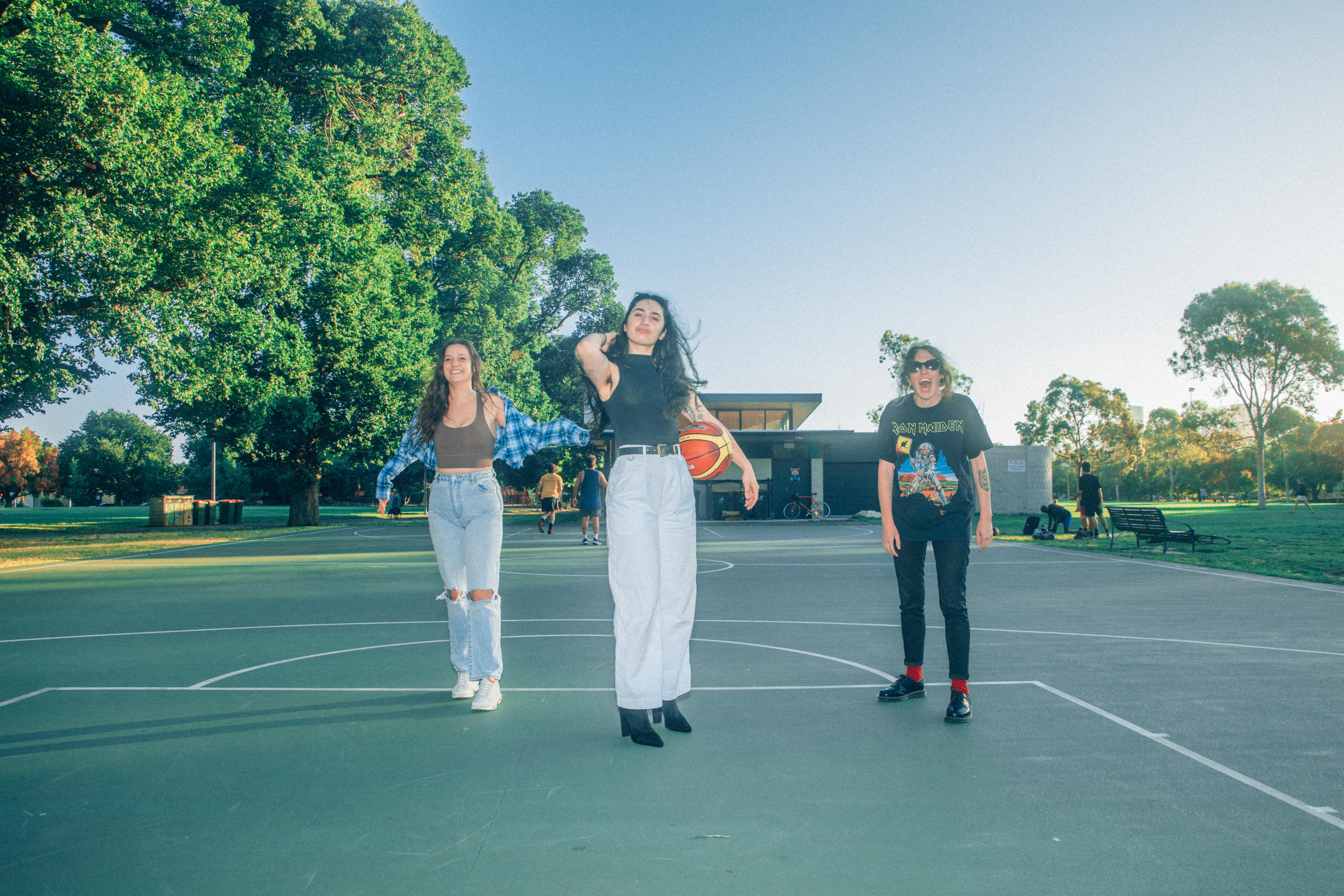 What separates Camp Cope from some peers is that their advocacy expands far beyond the records. While Running With the Hurricane centers on Maq’s personal life instead of a broader world catalyzed by injustice, the band is still fighting for safer workplaces and for the people whose voices have been suppressed by the system. In doing that, they lend their platform as light-skinned, able-bodied musicians to the people who can better speak out on certain inequalities. On their last American tour before lockdown, they invited Indigenous people from the cities they played in to come onstage and speak about the traditional owners of the land. “It’s who we are as people. We live to bring others up,” Maq says.

Named after a song released by Maq’s late father’s political 1980s folk band Redgum, Running With the Hurricane is a softer detour, embracing a wider palette of artistry and honing a delicate kind of self-love and hope. The songs are fuller, more orchestral, and breathable. New piano parts sprawl organically, which Maq cheekily compares to the uncoolness of Billy Joel. She sent recordings of her singing to Hellmrich and Thompson, who then wrote their accompanying arrangements together. “Kelly and I have always had a pretty unique way of writing together,” Thompson says. “You wouldn’t say we are a standard rhythm section, with Kelly playing high and playing the melody. We kind of play around each other instead of on top of each other.”

Retreating from the explicit lyrical advocacy of the broader population to  find refuge in advocating for themselves, the band passionately lament the mundanity of double texting while triumphantly pulling themselves up from the bottom on the album’s first two singles, “Blue” and “Running With the Hurricane.” With every sharp vocal run, a newfound confidence exudes from the album, which Maq attributes to spending months on the front lines of vaccine administration during lockdown. “Now I can open my eyes when I sing rather than closing them,” she says. “This album is very representative of where I want to go.”

A shifting tide, Running With the Hurricane is about, as Maq says, what happens after you purge your anger and frustration. “I feel what I sing and what I write deep in my soul,” she adds. “I’m just, like, yelling about shit. It kind of grinds you down and wears you out.” There’s a metamorphosis, sonically and lyrically, glistening on this record, which Maq and company have found through letting go in a moment where everyone is so quick to hang on.