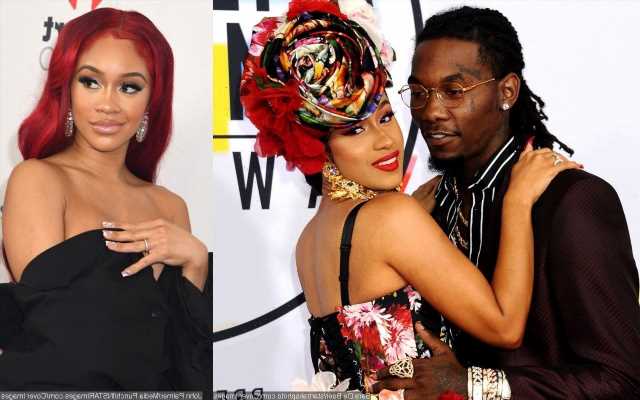 Previously, it’s reported that the ‘Bodak Yellow’ raptress is ‘ready to end her marriage’ to the Migos member as she ‘is not doing well’ and ‘humiliated’ after rumors he cheated on her sparked.

AceShowbiz –Cardi B may have leaked details of Offset‘s upcoming sophomore solo album. Making use of her social media platform, the “Bodak Yellow” hitmaker subtly revealed that her husband’s new album will address rumors that he’s cheating on her with Saweetie.

Over the weekend, the New York-born femcee clapped back at Instagram page @its_onsite after they published a screenshot of her feud with Madonna. “It is Sunday morning and Cardi B is up and at em ranting and raving about Madonna mentioning her name on an IG post yesterday… Seems like she responds to everything except that rumor… You know what never mind,” the caption read.

In the comment section, Cardi suggested that Offset will speak on these rumors in his forthcoming project, which will be released on November 11. “That rumor would be address on Offset album,” she wrote, “STAY TUNED.”

Later, Cardi turned to Twitter to reiterate her statement. “Baby Bop Ali keeps deleting my comment under her post, so flood this under there… The RUMOR will be addressed on Offset’s album,” she penned while slamming Rah Ali. She further added, “but while we wait let’s address why your side nikka GSTACKS was posting bout that baby in your stomach that was his and not your husbands?!”

The cheating rumors first surfaced on August 24 after Nicki Minaj‘s stylist dropped some shocking, but baseless accusations about Cardi and Offset through Twitter. Khalil claimed that Offset cheated on Cardi with Saweetie and that Cardi also promised to pay off the two bartenders she allegedly attacked at a strip club for sleeping with Offset.

A few days after the cheating rumors emerged, Quavo appeared to fuel speculation of Offset and Saweetie’s alleged hook-up with a snippet of his and Takeoff‘s new song “Messy”. On the track, lifted off their joint album “Only Built for Infinity Links”, Quavo disses an ex who hooked up with someone close to him.

“I said ‘Caresha please’ ’cause she too messy/ B***h f**k my dawg behind my back, but I ain’t stressin’/ You wanted the gang, you shoulda just said it, we would have blessed it, Now s**t got messy,” he raps, seemingly also taking a jab at Yung Miami.

However, some Internet users are not convinced about the Offset scenario and believe Lil Baby is actually the “dawg” Quavo was rapping about. Lil Baby reportedly took Saweetie on a shopping spree following her split with Quavo last year.

Lil Baby also appeared to address Saweetie on the song, “Not Finished”, where he spits, “She post a picture without my permission/ Got me in some s**t, man, these women is wild/ She f**kin’ n***as, but think I don’t know/ That s**t really a joke man, lil’ mama’s a clown.” The lines seem to reference a photo Saweetie posted with Lil Baby around the time of the supposed shopping spree.

More recently, it’s reported that Cardi is “divorcing” Offset. Media Take Out reported on October 12 that the “WAP” raptress “may be on the verge of ending her marriage.”

“Cardi is not doing well. Offset denied the rumor is true, obviously, and I don’t know whether Cardi believes him or not. But Cardi is in a bad place. She’s humiliated,” the so-called source added. “I think Cardi’s ready to end her marriage. It’s too much.”