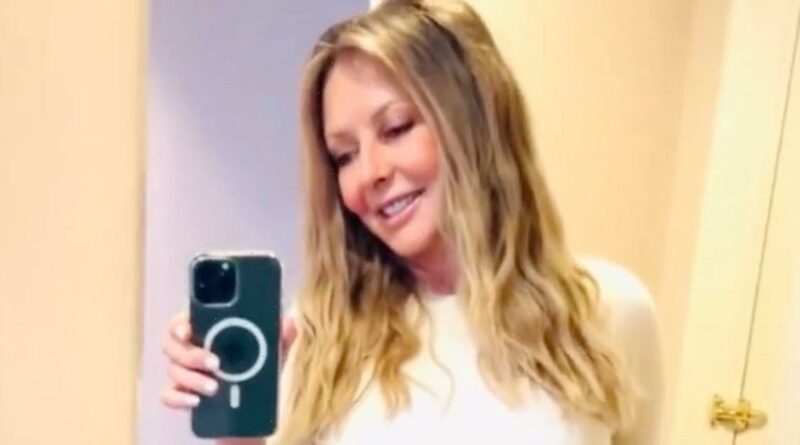 TV presenter Carol Vorderman showed off her latest hair transformation in a very racy outfit as she posted the glamorous makeover on social media.

Carol looked gorgeous as she donned a high-necked cream top with long sleeves which was tucked into brown high-waisted leather trousers, highlighting her tiny waist and hourglass curves.

She finished off the look with knee-high cream boots which showcased her long legs as she strutted her stuff for the video, leaving her fans hot under the collar.

The former Countdown's famous derriere stole the show as she filmed herself talking up the stairs in the hair salon while thanking her hairdresser for her touch-up.

Carol captioned the video: "I haven’t been to see my super glam hairdresser Petar Hristov for so long and I needed a tidy up.

"I’ve gone a little darker on top. He’s so glam and gorgeous…thanks PETAR."

Carol's new hair took centre stage as she let her long locks cascade around her shoulders while posing for a snap in a full-length mirror.

Keeping her make-up natural and elegant, Carol looked ageless in the clip as fans rushed to compliment her on her outfit and new hair.

A third chipped in: "Gorgeous Carol," as another agreed: "Def BBB (Britains Best Bum) ROTY (Rear Of The Year)."

The TV star has previously won Rear of the Year twice before, bagging it in 2011 and three years later in 2014.

Carol will be presenting the Pride of Britain Awards, which will be taking place on Monday evening, alongside Ashley Banjo.

It will be aired on ITV on Thursday evening, so viewers can see many deserving members of the public be awarded with the prestigious accolade.

Pride of Britain will air on Thursday October 27 on ITV at 8pm.