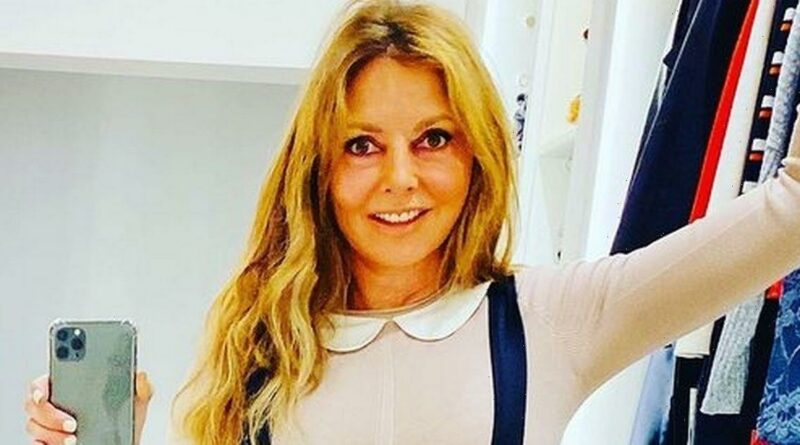 TV personality Carol Vorderman put on a tantalising display as she poured her incredible curves into a pair of black skin-tight leggings before heading for a walk around the city of Bristol.

The 60 year old took to Instagram to showcase her stunning physique while she gave her fans a glimpse of her natural beauty on Tuesday morning.

Allowing her long blonde tresses to cascade over shoulders the mother-of-two smiled gleefully for the mirror selfie while wearing a casual black top which she tucked into her leg-wear.

Giving her fans insight into her latest run outdoors, she captioned the snap: "This morning's little 5 miles round the harbour and home……so I love sitting with my tea on the wharfs….might give your leggings a mucky butt…but really does that matter? Ha. The answer btw is NO CAROL IT DOESN'T MATTER."

She continued: "Anyway there it is even in the cloud it's lovely ..and an interesting harbour too #Bristol."

Finishing off her caption she said: "Best get back to work now.. Happy Tuesday gang xx."

Providing fans with a glimpse of her walk around Bristol, the star also uploaded a video of herself enjoying a cup of tea as well as the gorgeous Bristol views.

Fans were certainly loving Carol's all black ensemble and took to the comment section to share their views.

She also uploaded the pic to her Instagram story.

One fan said: "Looking like that no it doesn't matter."

Another said: "Perfect… and the view is nice as well."

"You've probably heard it lots but God you are stunning," a third added.

Carol is an avid user of Instagram and often uses her platform to flaunt her amazing outfits as well as share positivity to her followers.

The former Countdown whizz who turned 60 last year December recently told Ok! Magazine that she loves her age and that she is embracing the older version of herself.

She also mentioned that she doesn't care of what people may think of her.

Speaking candidly to the publication, she said: "I love being this age. I can't be doing with people who aren't nice and I've never cared what people think. I have totally embraced 60.