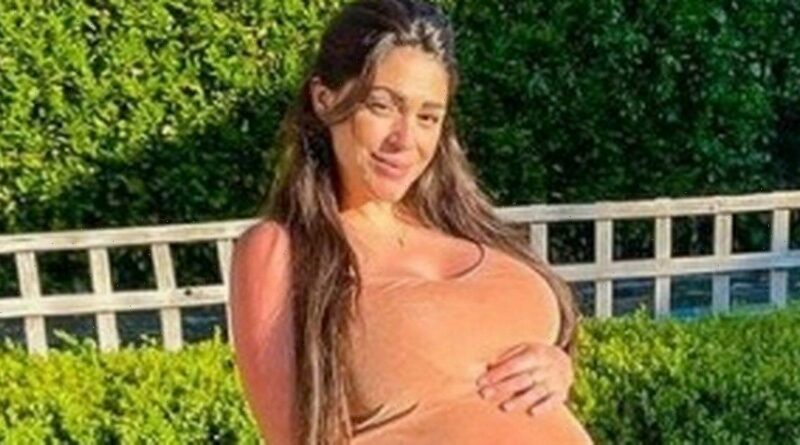 Model Casey Batchelor revealed on instagram that she has given birth to her third daughter with fiancé Dane Goodson.

With photos of her new baby girl’s hands, she captioned the post: "We now have three little princesses."

Just days ago fans were joking that Casey looked ‘ready to pop’ after the Celebrity Big Brother star posted a photo of her baby bump from her back garden.

Stood out in the sun Casey captioned: "Me and Bump catching some rays.

"Waiting for little lady to make her appearance."

Fans and celebrity friends were quick to offer compliments to the couple on their successful delivery.

Casey had announced her pregnancy in February of this year.

When speaking to Hello! Magazine she said: "We were just so happy and excited to have another one on the way. We feel very fortunate we get pregnant so quickly and easily. We’re obviously very compatible."

The pregnancy seems to have gone smoothly for Casey as she discussed with Closer magazine how she sometimes forgets she’s pregnant at all.

She said: "I’ve had no sickness, no tiredness – I often forget I’m pregnant.”

In the same interview she had spoken about how certain she was that it would be a boy this time.

"We had only discussed boys’ names and I’d planned a nursery; I was that sure.

"When the sonographer said it was a girl, I was in so much shock I came home and blurted it out to Dane. I had to cancel the balloons!"

When discussing the pregnancy and the potential future for more she said to new! Magazine: "I think this will be the last time though…

Casey’s weight loss journey following her second child lead her to lose over six stone through yoga training, fighting back at online trolls that criticised her and vowing to make 2021 a year of health.

She said: "2021 goals is to wear this blue bikini on a beach! It's been so tough for everyone to keep to their normal routines this year but the one thing that's kept me sane is my Yoga Blitz.