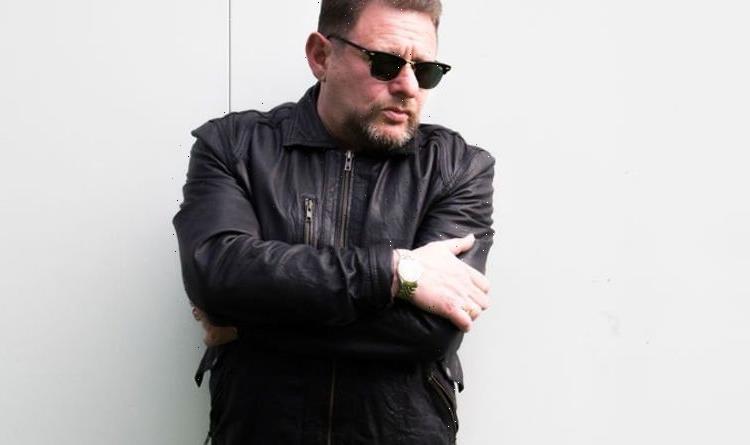 Alongside maracas-playing right-hand man Bez, Shaun and his band of rebels came in stark contrast to the clean-cut stars such as Jason Donovan and Bros who dominated the 1990s charts. But, having quit drugs nearly two decades ago, Ryder now faces a different challenge: ensuring his children aren’t spoiled. After growing up in a tough Manchester neighbourhood with his Happy Mondays bandmates, Shaun is bringing up two daughters with wife Joanne in comfort – inspired by Paul McCartney’s parental skills.

Denying he’s become middle-class, Shaun insists: “I’m still the same dude. I’ll be 120 and still the same. But my kids, yeah, they’re middle-class. They live in a different world to the one I did. In a way, that’s great, but it can be bad. I look at other parents around us with their kids and I think: ‘Don’t give them that! Why are you letting them have that?’

“We try to keep them as grounded as we can. Paul McCartney’s kids turned out the best of the lot, and he had all his kids on 50p a year. There’s a lesson there.”

Shaun’s daughters, Pearl, 13, and 12-year-old Lulu, help the star to stay grounded. Meanwhile, Joanne only agreed to start dating the lyricist and singer once he kicked drugs when he turned 40 in 2002.

The couple had friends in common, and Shaun admits: “We’d tried going out before, but Joanne binned me off. She said: ‘I’m not going to put up with your bull****.’

“When I got my head together, Joanne wheeled me in. I had a couple of relapses then, by 2006, my life was on track. Since then, my life has been very stable. I needed to grow up and come to my senses.”

They emerged in the late 1980s, instigating the fashionable “Madchester” scene with fellow Manchester rockers The Stone Roses. 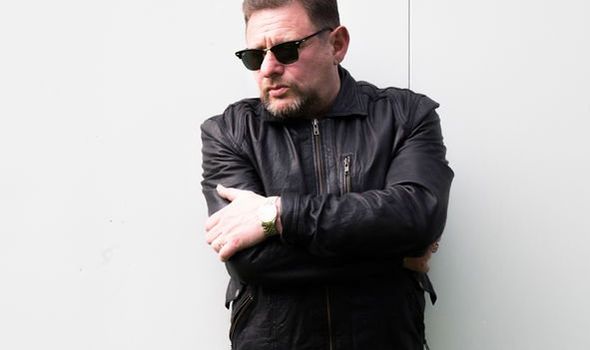 Bez’s saucer-eyed dancing was the perfect visual accompaniment to colourful hits including Step On, Kinky Afro and Hallelujah. But their drug taking increased until they split following the messy final album Yes Please! in 1992 – one review was memorably headlined, “No thanks”.

“When we came along, it was like punk hadn’t happened,” recalls Shaun, 58. “Bros are nice lads, but if they’d got caught smoking a joint, they’d have been dropped by their record company. That’s how nice everything was before we turned up. It was grandad and granny time. Me and Bez wanted to live the lifestyle of our heroes, like The Rolling Stones and The Who.”

Bez, real name Mark Berry, and Shaun are now family favourites, appearing as a hilarious duo on Channel 4’s Celebrity Gogglebox. But Shaun says of his bandmate’s lifestyle: “I don’t know anyone who’s consumed stuff like Bez. Good God! But when you’re doing all that stuff, you don’t see the danger and the madness of it. But Bez is the luckiest dude I know.

“You could drop Bez out of an aeroplane at 28,000ft and he’d land on something comfy, get up and go order a beer. You don’t have to worry about Bez.”

The fact Happy Mondays were able to enjoy their lifestyle in public means Shaun feels sorry for today’s musicians. He believes the music scene has become as clean-cut as when his band began. “The attitude now is that nobody should cheat on their girlfriend, and sex with groupies isn’t allowed unless you go straight to counselling,” he explains. “People will say that’s a good thing. But that’s what young ’uns are like, isn’t it? 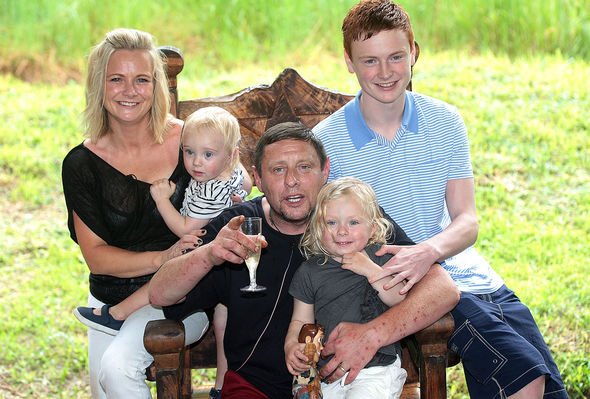 “Young people travelling the world, they’re going to get up to stuff, even when everybody’s got a camera on their phone and can’t wait to report it. It’s that time of life. It stops by 40. By then, you’re either locked up, dead or just a sad git if you’re still hanging on night after night.” Shaun speaks from bitter personal experience:

“I realised my life hadn’t changed since I was 15. I was becoming a sad old man. I’d tried quitting before, but it was either try to save my family or save the world. I’d never tried quitting just for me before.”

In the end, he used an exercise bike to get over withdrawal symptoms, pedalling all day long “until the shakes in my legs had gone”.There’s a heartbreaking side to Shaun’s drug habit. The singer, who has four grown-up children from previous relationships, was diagnosed with ADHD last year.

He says recognition of the condition changed his life, partly because he now understands why school was so tough for him. He sought confirmation of his ADHD after Lulu and his oldest child were also diagnosed.

“The diagnosis made so much sense,” says Shaun. “I was a bad lad, but that was to get a bit of attention because I thought I was thick.

“If you’ve got ADHD, it makes it impossible to remember stuff. When I was a kid, education was all about remembering things. I had no chance, so teachers wrote me off.” 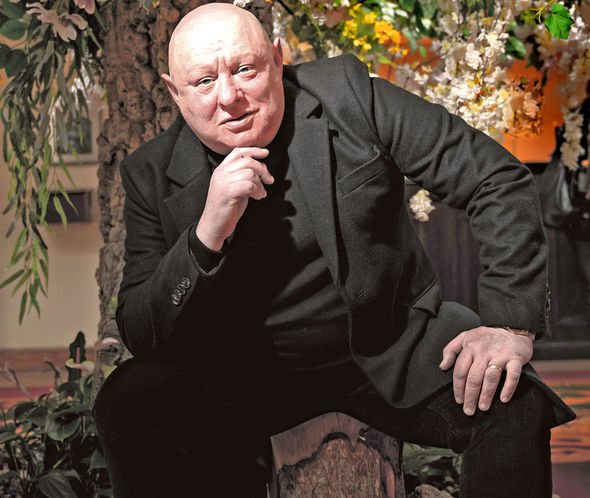 Shaun didn’t learn the alphabet until he was 26, when his then-girlfriend suggested he make up a song to memorise it.

“I learned my A-to-Z straight away then,” he says. “Because of the way my brain works, I need to sing the whole song. If you say: ‘Let’s drop in from H’, it’s not going to happen. When I was young, it was all confusion and madness in my head. I knew something wasn’t right, but I didn’t know what.”

Shaun began taking heroin when he was 18, saying: “It was the only thing that made me feel normal. That’s not me saying I approve of heroin. As if anyone needs to hear drugs advice from me, I’m saying stay away. But, yeah, that’s why I started heroin.”

Shaun’s turmoil is why he’s so passionate about getting the best treatment for Lulu, even withdrawing her from her private school, believing it wasn’t sympathetic to her ADHD diagnosis.

“My youngest is in a state school now. It’s not perfect, but it’s better. She’s what is called a ‘kinetic learner’, same as me.

“We both need to hold something in our hand to help concentrate. I was always told ‘Stop fidgeting!’ but that was the 1970s. It’s terrible my daughter is told the same. With the amount of courses teachers go on, why can’t they be better informed?”. 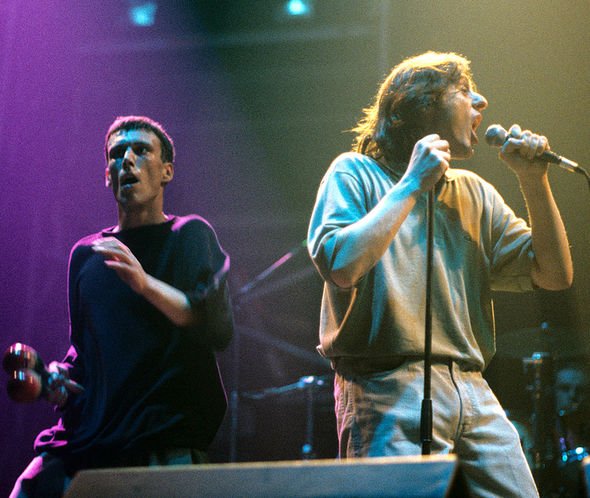 Alongside ADHD, Shaun also has an underactive thyroid, which has caused him to gain weight and suffer hair loss from alopecia. “It annoys me when people think I say daft stuff and look like I do because of drugs,” he says.

“I’ve been clean for so long, and I’m lucky, as I didn’t have any health conditions from drugs. My thyroid means I could eat lettuce everyday and still be 16st. I’ve also got a hereditary hip problem. I’ve had one replaced already and another new one is on the way. But I can’t complain, because I’ve been happy with my life since I got together with my missus.”

Shaun’s happiness is evident in his new solo album Visits From Future Technology. It’s as catchy and colourful as Happy Mondays and his other, recently revived, band, Black Grape. “The songs are still about stuff I get off the telly, everyday things,” he shrugs. “My songs are just things that get me thinking or dancing.” The animated video for single Mumbo Jumbo was directed by son Olli. “I thought, ‘There’s no way I’m paying £20,000 for a cartoon,’” laughs Shaun. “Olli and his mate make cartoons, so I just went: ‘Olli, will you do this for us?’”

And Shaun hasn’t lost his sense of mischief since sorting his life out. “The ADHD will always be there,” he says. “I’m still going to say and do some crazy stuff. If I have a pint, it’s likely to get a bit whacky…”