Jarrett Dougherty demurs at the suggestion that Screaming Females, the New Jersey punk rock band he formed with guitarist Marissa Paternoster and bass player "King" Mike Abbate in 2004, has a political agenda.

But he does concede that Screaming Females' do-it-yourself philosophy – which still underpins the band's management, booking, publicity and merchandise – has a political dimension.

"I think a lot of times when someone says a band is 'political', or that something about a band is political, they think it's against something," Dougherty opines. "But it also can be about creating something different, creating a community and it doesn't even need to be in reference to another style. 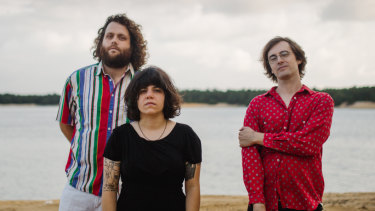 "Becoming involved in that brings a lot of pride and politics that comes with making things yourself. You do it yourself, create a scene. It certainly is political, but it also is about creating a community and something to do."

Screaming Females' DIY approach was born of necessity. A lack of live music venues in their home town of New Brunswick compelled local bands to organise their own shows in the basements of residential and commercial premises.

Paternoster, a student at Rutgers University's prestigious fine arts school, and her high school friend Abbate played in a local band, Surgery on TV, and when they met Dougherty at a New Brunswick basement show, the trio decided to form a new band.

Taking their name from a collection of poetry – the title of which "has been totally lost to the sands of time", Dougherty says – Screaming Females began playing short tours across the United States, booking gigs with the help of the out-of-town bands who'd dropped into New Brunswick to play gigs in the local basement scene. It was the very essence of DIY.

A combination of punchy punk rock melodies and Paternoster's ferocious guitar solos and evocative lyrics saw Screaming Females develop a loyal following in the US and, through online exposure, overseas. Still, Dougherty laughs, "no one in the music industry was coming to knock on our door in suburban New Jersey".

Having self-financed the recording and release of their first two albums, Screaming Females signed with Don Giovanni records in 2009, a pragmatic move that afforded access to the independent label's distribution network without compromising the band's artistic control.

In 2018 Screaming Females released theirs seventh studio album, All at Once. Having already written a loose collection of longer "rock songs" and shorter punk rock tracks, Paternoster, Abbate and Dougherty conceived of an art gallery metaphor for the album: "A big painting as a focal point in the middle, with a bunch of smaller paintings hanging around it."

Paternoster, whose art adorns all of Screaming Females' records, used the art gallery metaphor as inspiration for the cover of All at Once. While Paternoster concedes her art is inextricably linked with her lyrics, she's wary of lapsing into self-indulgent explanation. 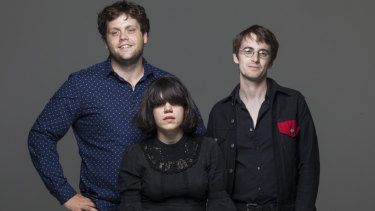 From basements to international tours, Screaming Females have retained their commitment to the DIY aesthetic.

"The two things [art and lyrics] are very closely related because they come out of me, and I'm one person," she deadpans. "I think I could get into some crazy sounding stuff like, 'I see music in shapes', but I'm not going to say that stuff because I'd sound nuts. But I do!"

The initial release of All at Once came with a limited edition 7-inch featuring covers of Taylor Swift's Shake It Off and Sheryl Crow's If It Makes You Happy, recorded as part of the AV Club's Undercover sessions. The fact that neither Swift nor Crow have any pretension to DIY status was irrelevant.

"We chose Taylor Swift because it was the most popular song on the list of songs presented to us – no one would care if we covered Velvet Underground or Pavement," Abbate laughs. "And we just love Sheryl Crow. Sheryl Crow writes slammin' hits!"

Screaming Females play the Eastern, Ballarat, on May 22, the Tote, Melbourne, on May 23, the Bearded Lady, Brisbane, on May 24, the Chippo Hotel, Sydney, on May 25 and the Brisbane, Hobart, on May 26.