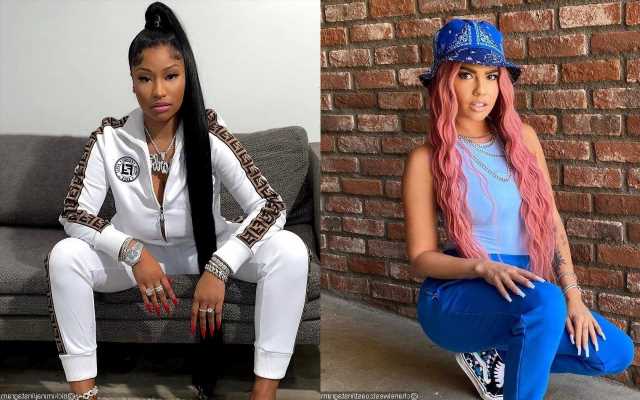 According to the rapper and ‘Ridiculousness’ co-host, her deal with Lil Wayne’s label didn’t last long because the ‘Anaconda’ raptress didn’t her want to be involved with the business.

AceShowbiz -Back in early 2010s, Chanel West Coast had a promising rap career and was even signed to Young Money. However, her partnership with Lil Wayne‘s label didn’t last long and she now has Nicki Minaj to blame for it.

In a new interview with Shirley Ju for “Shirley’s Temple”, the 32-year-old briefly talked about her short-lived deal with Young Money, confirming long-running speculation that she was cut from the label because the “Starship” raptress didn’t want her to be involved with the business.

“It didn’t work out because, basically, it was more because of certain people really not feeling me being part of the clique,” she vaguely said at first. When the interviewer mentioned Minaj’s name, Coast confirmed that she was speaking about the Harajuku Barbie. “Yeah, yeah, it was that,” she affirmed it.

Coast, however, stopped short from divulging the details, explaining, “But I don’t really wanna talk about that because it’s really old.” Grateful for her short time being part of the label, she added, “I’m really grateful that Wayne f**ked with me and gave me a co-sign and was like, be part of my clique, but yeah, I can’t control what happened. So many different politics that people don’t know behind the scenes.”

Having nothing against her former boss Wayne, the “Ridiculousness” co-host said she really wanted to work further with Wayne and even named her dog Weezy, but she hasn’t got the chance.

Coast previously hinted at Minaj’s involvement in her being kicked out from Young Money in 2019. She told No Jumper, “From what I heard, conflicts of interests, they had to stop managing me. I don’t know if [Nicki] is jealous but I don’t know if she supports other women that much… I was never vocal about that until Cardi [B] went hard and I was like ‘f**k it,’ if Cardi’s gonna go hard and blast her, why shouldn’t I blast what I’ve been through.”