A man with three hats clinks two glasses of wine together – a toast, a bell toll – then parades one down the aisle. He emits a strange vocal call, like a Gregorian chant or an exotic war cry, then returns to the stage, where a grand piano is draped in bunting of patterned rags. On the piano and the old pipe organ at the Hobart Town Hall, he riffs off an E note for the next hour.

Some people walk out. Others stay to the end and deliver him a standing ovation.

I meet Charlemagne (rhymes with lasagne) Palestine at Dark Mofo festival’s artist bar at Hadley’s Hotel. He instructs me to hold my wine glass by the stem so we can clink them together, just as he does on stage. 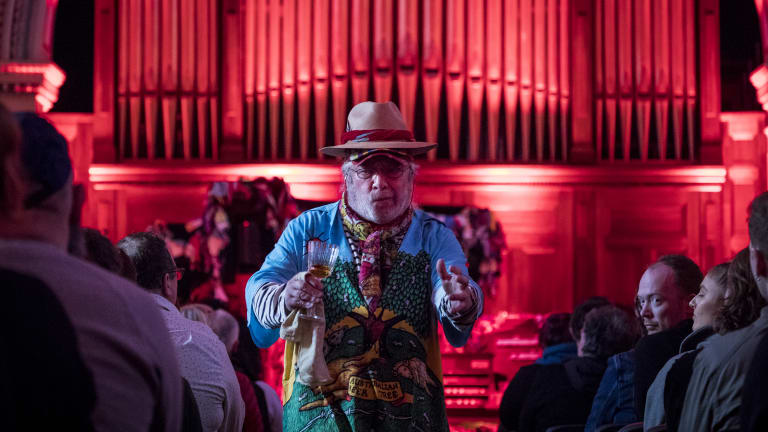 I mention the word minimalism only to tell him how much I like his counterargument (“maximalism”). He will be furious that I mention it again here.

“It’s like calling somebody a Nazi because their grandfather was German,” he says. (Palestine’s Jewish parents fled the Nazi threat in Europe to New York.)

Even Phillip Glass, with whom Palestine once shared a studio, thinks the word is stupid now, he tells me. It goes on like this, variously, with many an apt illustration and the use of the word “stupid” six times, for about five minutes, by which point I am thoroughly schooled. There is absolutely nothing minimal about Charlemagne Palestine.

He recently had the biggest exhibition of his career, which spans nearly half a century, in Los Angeles. He rescued 18,000 soft toys from op shops and assembled them in their multitudes.

Ironically, it was paid for by the Mike Kelley Foundation – the legacy of an artist who also used toys in his art but, along with the likes of Jeff Koons, enjoyed more commercial success and a higher profile than Palestine, despite the latter dabbling first. 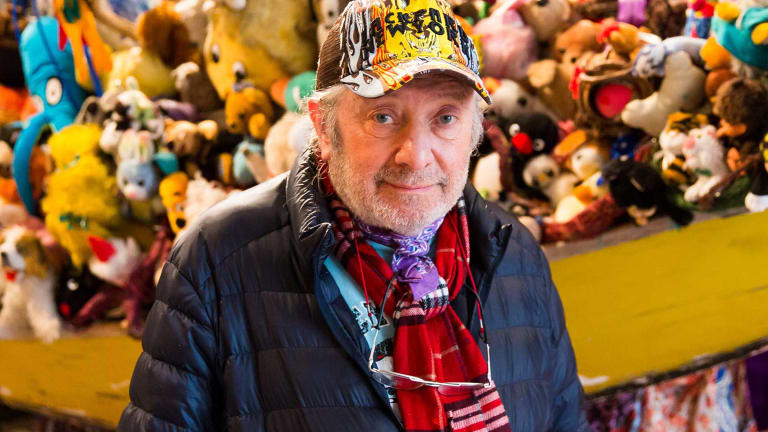 Palesetine with some of the ‘divinities’ in his recent LA exhibition, Ccornuuoorphanossccopiaee Aanorphansshhornoffplentyyy, at 356 Mission.

"Just after he died, almost the day after, all of a sudden it was like somebody opened a window that was closed to me for 40 years," he says, citing politics in the commercial art world.

"I was really hoping during putting the piece together that Mike would come out of the sky like from a Woody Allen movie and say, 'Charlemagne, I’m gonna f—ing kill you! What did you do with all the money I made? You did what I told you you could never do!'

"I was hoping that would happen because it would have been so much more fun than the silence."

I ask Palestine about the hats. He wore three on stage – two baseball caps and a fedora – but it’s just the caps now.

“I carry a hat of some of my friends who are no longer on this side, who are on the other side,” he says.

Hannah Francis travelled to Hobart as a guest of Dark Mofo and Tourism Tasmania.