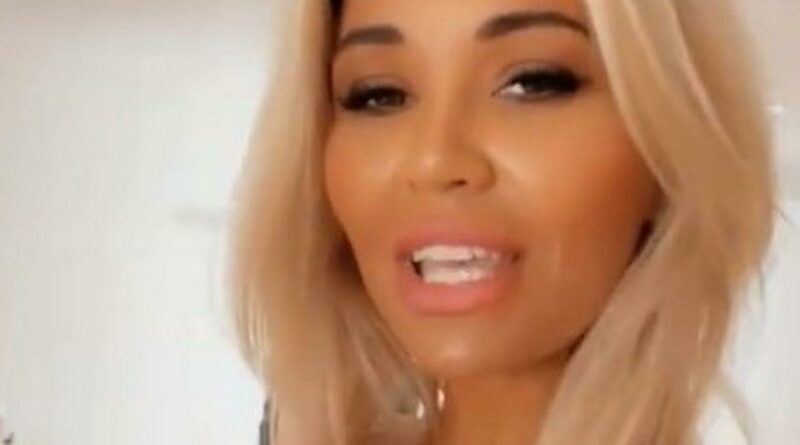 Christine McGuinness made sure she turned the heat all the way up on Friday, as she put on a racy dance display for her fans online.

Making sure she was the centre of attention, the mum of three gave her fans a sneak peak of what looked to be a photoshoot.

Wearing a very tight baby blue top and matching shorts, the star took to her Instagram stories and uploaded a video where she pranced around confidently in a studio.

Posing in front of the large wall-to-ceiling mirrors, Christine, 33, showed off her slender frame and gorgeous long legs as her long blonde hair cascaded in front of her.

The TV personality also did a close up shot of herself too where she showcased her stunning makeup.

She also turned around slightly and gave fans a sneak peek of her round, perky behind.

Listening to Robin S' 90s classic Show Me Love on full blast, the blonde bombshell showed off her impressive dance moves and squatted with her legs wide open for her online fans.

Last week, Christine and her husband Paddy celebrated their 10th wedding anniversary together.

The happy couple had a romantic meal and also bought each other balloons and flowers to mark the big day.

Earlier this year, Christine spoke openly about the struggles she experienced while parenting her three young children during lockdown, but admitted she took pleasure in the small happier moments and when the children have a breakthrough moment.

Paddy and Christine have twins Penelope and Leo, who are seven, and their four-year-old daughter Felicity. All three children have been diagnosed with autism.

Christine explained: "Seeing the children do anything new makes us feel like we’ve won the lottery and want to do cartwheels.

"They played in snow for the first time. They were always scared of the snow. But this year we got out there and eventually they were rolling around in it.

"I tried not to make too much of a fuss because I knew if I did they might stop. I watched the video back and thought, 'wow this is amazing'."