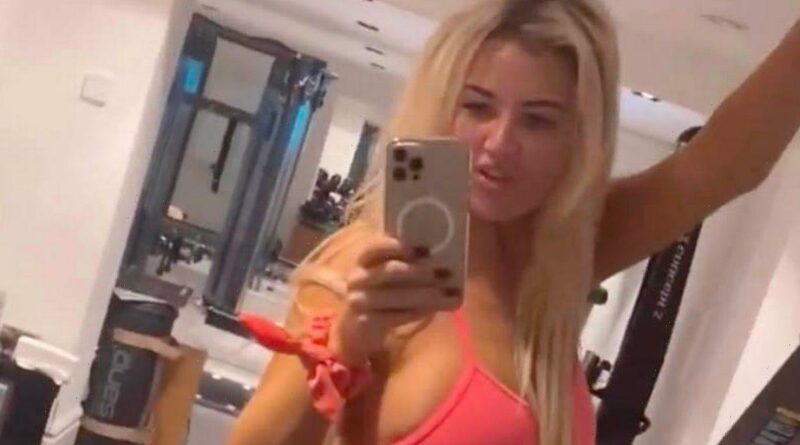 Christine McGuinness sent temperatures soaring in a series of sexy workout videos as she flaunted her jaw-dropping figure on Instagram.

The 33-year-old influencer stunned her 643k followers with the late-night workout pics wearing a pink bralet which could barely contain her ample cleavage and skintight leggings that accentuated her pert bottom.

She flashed her svelte waist in the ensemble while posing at herself in the mirror.

The TV personality, who is married to Top Gear host Paddy McGuinness, took to Instagram to tell her Instagram followers that she enjoys her evening workouts because she struggles with insomnia.

She said: “It's 1am and I've just finished training, I have mentioned before that I have Insomnia so it doesn't matter to me.

“A few of you go oh my god, how do you it? But do you know what, it just means that I can spend the day doing other things and then get in here when everyone's asleep.”

The post follows a recent busty display as she posed in the same gym in white sports bra.

She went on to detail her hopes of getting back to a normal routine after proclaiming she doesn’t know “what bl**dy day it is anymore”.

The mother-of-three added: “Once January's here and we've got a bit of normality a bit of a normal routine, Kids back at school back to work all of that, I will be able to work out during the day sometimes.

“But for now I'm happy with this no nagging, no ones mad at me, no one's online so I am talking to myself.

“I might as well say good morning, I hope you all have a lovely day, I don't even know what b****y day it is anymore! But anyway I am going to go and have a shower goodnight, god bless sweet dreams.”

The post comes reports that Christine is in talks to star in ITV's new game show The Real 2022 Games.

It’s clear the star is attempting to build her TV career after she appeared in Strictly The Real Full Monty and also presented a documentary on autism for the BBC after revealing she suffers from the condition herself.

The TV star, who shares eight year-old twins Leo and Penelope, and five year-old Felicity with hubby Paddy, admits found it slightly tougher to pick up some of the routines for the Strictly show but eventually joi

ned her co-stars taking to the stage for the empowering performance.