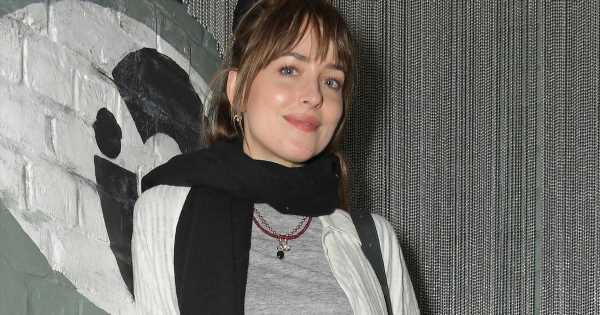 Dakota Johnson has said she is "cosy and private" with Coldplay frontman Chris Martin, but the couple party inside her home.

The Hollywood actress said she has been in a relationship with the 44-year-old British music star for "quite a while".

Johnson, 32, made the comments during an interview with Elle UK, which features the actress on the cover of its February 2022 edition.

She said: "We go out sometimes, but we both work so much that it's nice to be at home and be cosy and private.

"Most of the partying takes place inside of my house."

Martin recently revealed that Coldplay will not make any more music as a band after 2025.

She will next be seen in Maggie Gyllenhaal's directorial debut film The Lost Daughter, adapted from the novel of the same name by Elena Ferrante.

Speaking about her breakthrough meeting with Gyllenhaal, she said: "We went so immediately deep into the experience of being a woman, both in film and in this world.

"I don't know if you've ever had this where you meet another woman and see parts of yourself in them that you didn't know you had before you'd met.

"It's almost like they turn up the dial on your life. And Maggie has been that person for me. She's such a truth seeker."

Speaking about Colman, Johnson added: "Well, I was just like… I wonder what she's going to be like, but we loved each other, and she's a wild time.

"She's so maternal and embracing and always wants to hang out and drink wine and talk."

– Read the full interview with Dakota Johnson in the February issue of Elle UK, on sale from January 6.