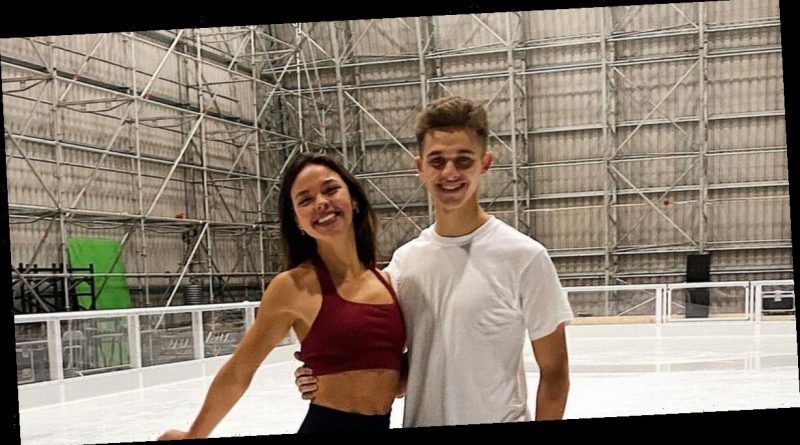 Dancing on Ice 's Vanessa Bauer and Emmerdale actor Joe-Warren Plant were both spied entering the same vehicle together as they left the ITV studio.

In the pictures obtained by The Sun, the duo who have been paired together on this years show were spotted exiting rehearsals together, with Joe, 18, taking the wheel of the car and Vanessa, 24, at his side in the passenger seat.

After officials for the broadcasting giant had confirmed that show will go ahead as planned in spite of the coronavirus pandemic, the pair wasted no time with getting some last-minute training in at Blackpool's Arena ice rink.

The sighting comes after the stunning German skater recently has been linked to a hunky personal trainer amid the rumours mill being sent into overdrive after speculation mounted to suggest that she had grown closer to her skate partner Joe.

However, it would now seem that Vanessa is dating fitness fanatic Rory McCall with the pair spending Christmas with each other and later being snapped together in London.

After claims surfaced concerning Joe-Warren's close knit bond with his pro-partner Vanessa, The Sun reported that the soap star had moved out of the home he shared with his girlfriend Nicole Hadlow, 24, of three years.

At the time an insider revealed to the same publication that Nicole was not keen on Joe spending so much time training with Vanessa.

They claimed: "Obviously it's only a few weeks ago that Joe-Warren was splitting up from his girlfriend and everyone was talking about his closeness to Vanessa — and now she's quietly meeting a new guy."

The source continued: "Joe has been staying at his mum's place in Blackpool after moving out but of course he still has training commitments because the show will be starting very soon.

"Vanessa and Joe are playing down suggestions of romance, but his girlfriend was clearly uncomfortable with their relationship and now she’s already dating someone else in secret. It all just seems very awkward."

The professional skater has remained single ever since last January when she parted ways from cruise ship dancer Louis Nathaniel.

Dancing On Ice returns to screens on January 17 on ITV.