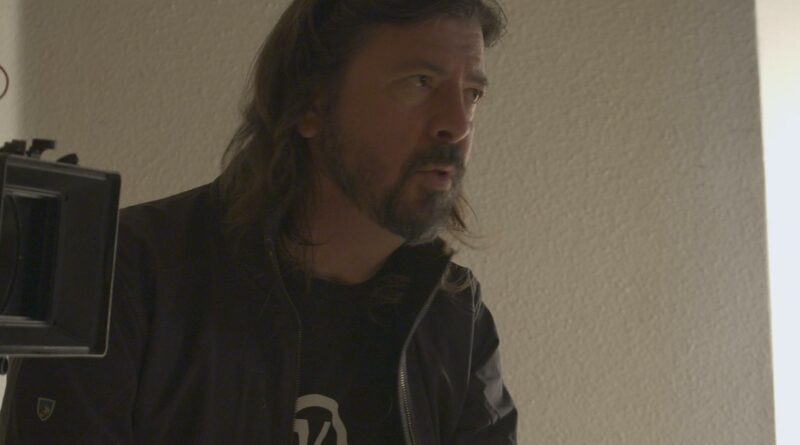 “All of the biggest bands in the world, they had to start somewhere. Everybody I know started out like this: in a van,” Dave Grohl says at the onset of his new documentary What Drives Us, a film that chronicles the early touring days of some of rock’s most enduring groups, including U2, Metallica, Red Hot Chili Peppers, and, of course, the Foo Fighters.

“What happens in the van is the foundation of who we become,” adds Grohl. “It creates this unique perspective that we all share. Personally, I don’t think that I’d still be here if it weren’t for those early experiences, touring in a van, touring with my friends. If it weren’t for that old van, I don’t know where I’d be.”

St. Vincent, Lars Ulrich, Flea Talk About Their Love of Performing in 'What Drives Us' Clip

The Best Audiophile Turntables for Your Home Audio System

Under the guise of a documentary on van touring, the film also digs into what drove these artists to pursue a career in music. (Spoiler alert: It was often to escape the doldrums of suburban life.) As AC/DC’s Brian Johnson tells Grohl, the only way to escape his sleepy British hometown was “to be a good [soccer] player, or music.” For Flea, playing music — trumpet in his youth, with dreams of being in a symphony orchestra — was a means of avoiding his stepdad, an abusive addict. “When I held that fucking thing to my lips and blew on it,” he says, “it was like all the chaos, all the fear that hung over, because it was a crazy night and the cops came to my house and my stepdad was shooting at them and threatening to kill himself … all this stuff all disappeared.”

What Drives Us also serves as a celebration of live music, which makes piling into a van for hundreds of hours and thousands of miles all worth it. While the documentary gazes back at those halcyon days of fledgling bands touring, the footage of stadium-filled concerts induces nostalgia simply for a pre-Covid existence where any live show — big or small — could take place without consequence.

Featuring dozens of interviews with artists ranging from Annie Clark and Steven Tyler to Flea and Ringo Starr, What Drives Us — now streaming via the Coda Collection, available through Amazon Prime Video — provides a candid look into the early chapters of huge bands that fans might not have known about. Here are 11 things we learned from the documentary, from hardcore punk’s impact on the touring industry to the Beatles’ rules about in-van flatulence.

1. The Beatles saved U2’s the Edge from his hobby of pyromania.
The Edge is among the artists in What Drives Us who state that music inspired them to shake up the monotony of everyday life and, in the guitarist’s case, drop a potentially dangerous hobby.

“The one downside of living in the ‘burbs of Dublin city is often there’s not a lot going on, so we’d have to find other ways of amusing ourselves. That’s when we got into explosives, and that was a kind of interesting phase. We had a couple summers, good fun blowing things up,” the guitarist tells Grohl.

“We got over that phase at age 15,” he continues. “But you’re in this nice little town with not a lot happening, so things went horribly wrong when I discovered rock & roll.” Thinking back to what experience made him want to play music, the Edge cited his first viewing of the Beatles’ A Hard Days’ Night as what saved him from a life of pyromania.

2. AC/DC’s Brian Johnson wanted to be a drummer. Then he heard Little Richard.
For Johnson, his moment of discovering rock & roll came at age 12 when he witnessed Little Richard performing “Tutti Frutti” on the BBC. “I was like, ‘What the fuck?!’ It turned me on my tits,” Johnson — who first dreamed of being a drummer — tells Grohl. “I couldn’t believe anyone could sing like that.” Rock & roll later saved Johnson from his dead-end job as an overnight (10 p.m. to 9 a.m.) worker on the factory floor at a warehouse in his hometown.

3. Ben Harper was radicalized by his next-door neighbors, goth-rock legends Christian Death.
Ben Harper reveals that he primarily listened to “Casey Kasem pop music” during his youth in Los Angeles, and at such a high volume that his neighbors eventually came over and pulled the wires from his radio. Those neighbors: goth-rock legends Christian Death, who introduced Harper to the music of the Clash and the Jam. From there, at age 19, Harper went on to discover Mississippi John Hurt, one of his chief influences.

4. Lars Ulrich is the luckiest man in the world and shouldn’t be in this documentary.
As the drummer informs Grohl minutes into What Drives Us, Metallica’s success came so quickly that he has never actually traveled by van to gigs, and thus has nothing to contribute to the documentary. “So, can I go now?” Ulrich asks Grohl before the interview starts.

In contrast with the struggle faced by so many other artists who feature in the documentary, Ulrich reveals that Metallica is the only band he’s ever been in, so he never had to suffer through five-person crowds and the inability to book gigs that plagued so many other eventually famous groups early in their careers.

5. Dave Grohl credits van touring with saving the Foo Fighters.
Through previously unseen home movies, a portion of What Drives Us takes the viewer back into the Foo Fighters’ van during a May 1995 tour, two months before the band’s self-titled debut album — recorded by Grohl alone — was released.

While most artists, from Aerosmith to St. Vincent, traversed the nation by van to spread their music to a larger audience, Dave Grohl — just a year removed from the end of Nirvana, and already signed to a major-label deal — didn’t necessarily need to travel that small, but opted to anyway, as a bonding experience with his new bandmates.

“We kind of felt like we needed to have some experiences of our own. Go out and do stuff, so the van just made perfect sense,” Grohl says of that early Foo trek with guitarist Pat Smear. “Had we not done that, we probably never would have made it through the first year.” Grohl is so indebted to the van that, at the documentary’s start, he seeks out the Foo Fighters’ original van and, after locating it, drives it around the remainder of the film, sharing anecdotes along the way.

(An attempt to relive the Foo Fighters’ original van tour in 2020 to celebrate the band’s 25th anniversary was ultimately canceled due to the Covid-19 pandemic.)

6. Hardcore legends D.O.A. are credited with the advent of DIY van touring.
Both Ian MacKaye of Fugazi and Minor Threat and Guns N’ Roses’ Duff McKagan credit hardcore punk greats D.O.A. and their 1979 trek as the maiden voyage that sparked thousands of van tours.

D.O.A.’s odyssey began in their native Vancouver, headed east to New York and Washington, D.C., and back west to Los Angeles, where the group told Black Flag that they should do a show in Vancouver; soon after, Black Flag piled in a van and played a string of West Coast shows on their way to British Columbia. A nationwide network of venues and places to crash — aided by college radio — became the blueprint for other punk acts to follow. “D.O.A. came in with the hatchets; Black Flag came in with, like, the steamroller,” MacKaye says.

7. Even the Beatles farted in their van.
“I think it’s great for the band in the van because you get to know each other; you’re locked in. I think that was part of us coming together, as the song says,” Ringo Starr says of the Beatles’ time driving around the U.K. before Beatlemania. The drummer also offers up some advice from those early days: “If you fart in the van, admit it. Because it causes so much trouble.”

Starr also gets nostalgic for one treacherous drive home with the Beatles. “You know what was crazy: We always drove home. We never stayed in a motel or in a tent; we drove home and then got in the van the next day and went to the next gig,” Starr remembers. “We were driving from London, like the coldest day ever in Britain, coldest night in Britain, freezing cold, snowing. Just the worst. And the windshield went. It had a bench seat, so we laid on top of each other, the Beatles, and if you got to the top, you had a slug of whiskey, and then you moved your way down and the next one had a slug, and that’s how we got home without freezing to death.”

8. No Doubt once played to a crowd smaller than the actual band.
No Doubt’s Tony Kanal reminisces about one of the Orange County ska band’s early tours and how their gig at a venue in Oxford, Mississippi, sold zero tickets. Drummer Adrian Young thankfully befriended some girls at the band’s hotel, so four people ended up attending the show. However, the audience was smaller than No Doubt’s then-touring unit of seven people, so the band rotated members offstage to even the balance.

9. Packing a tour van is like playing Tetris.
One common bond shared by every band that’s packed into a van is the challenge of loading up the vehicle when heading out on the road. But like snowflakes, no two van arrangements are the same. The artists interviewed in the doc each share their different gear-storage permutations, the perfect placement of which Grohl compared to playing the brain-teasing video game Tetris.

Eventually — if your band made it — you’d graduate to U-Hauls, as Flea says, allowing the group to sprawl equipment-free in the van. “You can sleep with Chad Smith’s fucking feet in your mouth, but you’d get a little shuteye,” the bassist jokes.

10. Napster foe Lars Ulrich now embraces technology.
It only took a pandemic — and the necessity to livestream during lockdown — but the man partially responsible for the downfall of the Napster file-sharing program now admits that he’s embracing a music-industry future that’s growing more high tech with each passing year. “I not only accept the technology and where it’s gone, but I actually love it,” Ulrich tells Grohl.

11. Streaming (maybe) killed the van tour.
With new technology and the different ways music is discovered now — streaming service playlists have more reach than a thousand small club gigs — the need for van touring has diminished. So too, some veterans argue, has both the quantity and quality of rock bands, as those indispensable van journeys were formative and foundational experiences for fledgling artists.

“It’s funny, Thom Yorke brought that point up to me as well,” adds Flea. “He just said there was so few of us left that can go and play big places all over the world, can fill up arenas and stadiums all over the fucking world. At a certain point in the late Nineties or something, they put up a big fence or drew a line and made a big wall, and all of us that were on one side of the wall got to do it for the rest of our lives, and no one else came in. And has anybody else come in the last 20 years, a rock band? Is there one? No, right?”